I was having a conversation the other day about Quentin Tarantino films and commented, to everyone’s surprise, that I really enjoyed The Hateful Eight, because I’ve always enjoyed westerns. It’s a genre my dad enjoys and I remember watching them with him growing up. I think that I tend to be more forgiving of westerns because of this. It also means I’m always up for watching one, especially an Australian western starring George MacKay, Charlie Hunnam, Russell Crowe, and Thomasin McKenzie. One of my favourite films of the last year was Australian – Danger Close – and I feel in love with Hunnam on screen in Sons of Anarchy and McKenzie in Leave No Trace. This movie, however, did not live up to my expectations.

The film is long, coming in at 124 minutes and it started off with a lot of promise. George MacKay plays Ned Kelly, but for the first 30+ minutes, Orlando Schwerdt plays a young Ned Kelly. I really enjoyed this part of the film. We had Hunnam and Crowe on screen quite a bit and Schwerdt did an admirable job. Then we fast forward and Kelly is grown and played by MacKay. There’s nothing wrong with MacKay’s performance, but there’s a lot wrong with the character. He’s all over the place and difficult to follow. The saving grace during this part of the movie is Nicholas Hoult as Fitzpatrick and Thomasin McKenzie as Mary Hearn.

I want to reiterate that I think MacKay did a great job portraying Kelly, I just don’t think it’s the character I expected to see. He was quite a bit crazier and way more unhinged than I expected. In reading the background on this film, I was rather surprised to learn that MacKay spent 6 months cutting down trees, horse riding, and boxing in order to prepare physically for this role. He even trained as a jackaroo, an Australian ranch hand.

I feel that the movie’s title tricked me. I walked into this expecting a true account of Ned Kelly and instead I was greeted with historical fiction. A few nuggets of truth were used to craft an alternate story. I would have preferred if this film were based on Ned Kelly’s Jerilderie Letter. I enjoy certain biopics and was really excited for a western biopic… don’t let the title of the film fool you.

Finally, let’s talk about the cinematography. I feel I needed to be warned about the excessive use of strobe lighting in certain scenes. It was overpowering and made the scenes difficult to watch. I realize that the goal was dramatic effect, but when the screen suddenly starts flashing in a western, it can be a little unexpected and unsettling. I didn’t enjoy these scenes, which occurred during the most climactic moments and ended up being more than a little bit off-putting.

At the end of the day, the film has its moments and I enjoyed them. I think that the movie either needed to push into the 180-minute territory to further expand on the stories it was telling (even at 124 minutes, it felt rushed at times, like parts of the story were skipped or modified) or it needed more cut in order to be shorted to around 90 minutes. I think this is one of the challenges in turning a book, especially one as popular as this one, into a film… it’s hard to describe everything and you end up rushing the story and leaving bits out. I would be curious to see how the film played out if you watched the first 45 minutes and the last 45 minutes and cut out a bit of the story in the middle.

True History of the Kelly Gang is available on Friday, April 24 on Digital and VOD. 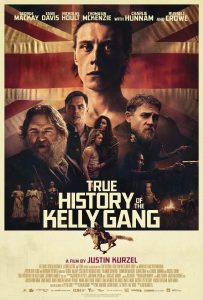 Movie description: Set amidst the grueling badlands of 19th-century Australia, legendary outlaw Ned Kelly (George MacKay, 1917, Ophelia) grows up under the bloody and uncompromising rule of the English. Food is scarce, survival is filled with daily strife, and every opportunity the colonizers take to make their victims feel powerless is inflicted with searing brutality. In a desperate attempt to prime him for rebellion, Ned Kelly’s mother (Essie Davis, The Babadook), sells him off into the hands of the notorious bushranger Harry Power (Russel Crowe, Cinderella Man, L.A. Confidential), where the young bandit discovers he comes from a line of warriors called the Sons of Sieve. Fueled by his roots and a voracious appetite for revenge, Ned Kelly leads an anarchist army to wreak havoc on their oppressors in one of the most audacious attacks the country has ever seen. Grimy, gritty, and full of action-packed thrills, True History of the Kelly Gang brings a revolutionary twist to an iconic piece of folklore. Based on the novel by Peter Carey.