It was Saturday night and my wife said, “You pick the movie.” Leave No Trace had been on my list for a while, so it was either that or Eighth Grade. Upfront, I’ll say that it’s an interesting movie and one that makes you think and leaves you asking questions. It leaves you filled with sorrow and anger and a yearning to better understand the pain that soldiers feel when they return from war. It is easy to tell that it was adapted from a novel, watching the movie unfold feels like reading a book. There’s nothing wrong with that but I read and watch movies as different forms out entertainment, ultimately with different goals and this one fulfilled more of the book side than the movie side. If “audio books” were “books on tape”, then this could safely be called a “video book” or “book on video”. I was surprised that it had a 100% rating on Rotten Tomatoes, I don’t feel like the concept was 100% unique, we’ve seen pieces of it before.

The movie starts with a man, Will (played by Ben Foster), and his daughter Tom (played by Thomasin McKenzie), who have been living in the forest for years. They try to stay off the grid and fly under the radar but Tom is spotted by a hiker and the police and social services search the woods for them. In order to avoid being separated, Will and Tom spend a brief time trying to live by the rules of social services, but Will’s mental health issues (seemingly related to his military service), prevent him from functioning within society. The pair run away from their new home in search of a better life in the wild. The journey is filled with risks as they attempt to find a place to call home again.

The first thing to talk about is the casting. Thomasin McKenzie and Ben Foster are incredible. They are both incredibly believable in their roles and they bring the viewer along on an emotional roller coaster. It is easy to feel Will’s fears and concerns around society and the yearning he has to disappear into the wild. The feelings aren’t easy to understand as an outsider looking in, but that doesn’t keep you from experiencing them along with him. If movies have a tendency to make you feel anxious or awkward when characters find themselves in certain situations, I suspect that you’ll have a knot in your gut the entire time you watch this. Similarly, Tom feels incredibly naive and lacking in basic social understanding. You can tell she wants more but that she also wants to be with her father. A sentiment that she reiterates when she has a home and it is with her father, which is very touching, yet also indicative of how different her life has been. As an added bonus we get to see both Dale Dickey and Jeff Kober, a pair of actors that show up everywhere and always bring an amazing performance.

It is clear to see that Will cares for Tom and has her best interests at heart at the start of the film, but as it progresses, the movie tends to be less about their relationship and more about him finding a way to deal with his demons, even if it negatively impacts his daughter. My wife and I found ourselves getting angry with Will and the decisions he was making, while feeling sorry for Tom. It’s difficult to sort out exactly how you feel during this movie. On one hand, Tom seems happy – on the other hand, she’s missing out on so much. At the end, she makes a difficult decision and you’re happy to see her make it. Unfortunately, you end up angry with Will for the decision he makes. At the same time, however, you understand because both actors have done such an amazing job of making you feel what they are feeling.

If you want a movie that will make you feel good, you’re better off turning to the Hallmark Channel. If you want action and adventure, this movie won’t be for you. If, however, you want something that will gnaw at your gut, make you feel uncomfortable about society and the way we live, and wonder if there’s more that you can do to help society and those with mental health issues, then this movie is for you. It tells a powerful story, with a compelling cast, but it’s definitely not easy to watch without feeling all tied up inside. 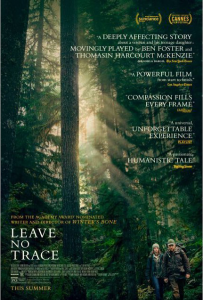 Movie description: Will (Ben Foster) and his teenage daughter, Tom (Thomasin Harcourt McKenzie), have lived off the grid for years in the forests of Portland, Oregon. When their idyllic life is shattered, both are put into social services. After clashing with their new surroundings, Will and Tom set off on a harrowing journey back to their wild homeland.