Intense. I’m not sure how else to describe the Australian film Danger Close. I have never cursed, yelled, and shaken so much while watching a film. When they announce the Oscar for best picture, this is the type of film I expect to see announced and I can’t praise it highly enough – I was absolutely blown away by the entire production. The movie tells the true story of the Battle of Long Tan and I would never have seen it if not for the star of the film, Travis Fimmel. I saw Fimmel in Finding Steve McQueen and was impressed with his performance, so when I saw his name attached to this film, I knew I had to see it. I was not, however, prepared for what I saw on screen. It was something magical that I don’t think can be recreated… I’m not sure how director Kriv Stenders captured it all, but… wow.

I have long been a fan of war movies – Apocalypse Now, Saving Private Ryan, Platoon, Full Metal Jacket, Black Hawk Down, The Hurt Locker, Fury, Dunkirk, Inglourious Basterds, Letters from Iwo Jima, The Thin Red Line – there are so many great war films that it’s difficult to list all of them. None of them can touch Danger Close. I have never watched one of these films and been as involved, as drawn in, and as on the edge of my seat as I was with this movie. The victories and defeats, the ups and downs, and the mateship that the soldiers experience – It’s difficult to find the right words to describe the movie.

The Battle of Long Tan saw 108 soldiers from the 1st Australian Task Force – D Company, under the command of Major Harry Smith (Fimmel) fight thousands of soldiers from the Viet Cong and People’s Army of Vietnam. The movie starts following the soldiers in the days leading up to the battle and into the days following the battle. On paper, the film covers less than a week, but watching the battle unfold it feels like a lifetime. Fimmel does an amazing job on screen bringing Smith to life, a former special forces soldier that holds his company to a higher standard than others, something that prepares the soldiers to fight outnumbered and outgunned in this battle. At the end, we see a softer Smith that respects his men as he realizes how hard they fought and how they all stood together.

Watching the film, knowing that it is based on a true story, it was shocking to discover that it took the Australian government 45 years to recognize the brave men involved in this fight. I cannot imagine the hell that they went through, but seeing the story told I was filled with disgust at that delay.

I could write a lot about this film, but there’s really no need to. All I need to say is SEE THIS MOVIE. This will be one of the greatest movies you see this year. It may, in fact, be one of the greatest movies you ever see. I know I’m running a risk of overhyping the film, but I’m still on an adrenaline rush and I’m still in awe of just how much I was yelling during the movie. Check it out in theatres, on digital and On Demand on November 8. 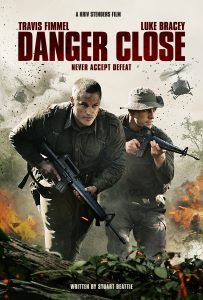 Movie description: Major Harry Smith (Travis Fimmel) and his company of 108 young and inexperienced soldiers are fighting for their lives in the Battle of Long Tan. With 2,500 battle-hardened Viet Cong soldiers closing in, their ammunition running out and casualties mounting, each man searches for the strength to triumph over an uncertain future with honor, decency and courage.

How do you take a rising action star, cast them alongside one of the greatest actors in film history, and create a horrible film? This was the thought that went through my head while I […]