It is no secret that I like Christmas movies. I like them more than my wife… which isn’t difficult given that she dislikes most romantic cheese. Given her disdain for so many of the films in this genre, I feel like she’s a good barometer for determining if a film is good or not. She very clearly informed me while we were watching the film that I definitely liked it more than she did, but that she was enjoying it. Given that, I’d say that it is a clear endorsement of the film. I guess you could say that that watching Middleton Christmas caused my wife’s heart to grow three sizes that day.

If there’s a downside to Middleton Christmas it is likely that the “teenage” cast clearly looks to be in their mid-twenties and they didn’t really do a lot to hide that. If the film had been set at a college instead of a high school, the cast would have fit better, but a major component of the story wouldn’t have been possible. So, what is the story? Middleton Christmas follows two families, the principal of Middleton Prep and her daughter and the new caretaker, a commitment-phobe who constantly moves, and his son. Surprise, Surprise… two single parents and two teens… I wonder where this film is going?

The film has a typical “Hallmark feel”, but it’s not a Hallmark film and that becomes obvious half way through when a major plot twist (included in the film’s synopsis) happens. For that reason, I recommend against reading the synopsis before watching the film. The film is also brightened up a bit with lively dialogue like, “I don’t know where I’m going. I just know that it’s not with you anymore.” This was one of my favourite lines of the film, but not the only one that caught my attention. The writer did a great job in that department.

It is also worth talking about the casting. The parents Alana D’Angelo (Eileen Davidson) and Johnny (Michael Paré) were both excellent. Paré has 175 credits on IMDB with 22 in either completed, post-preduction, filming, pre-production, or announced states. I was very impressed with his performance as a former soldier who is afraid of commitment and I’d like to see him in more films. Davidson on the other hand is famous for her more than 1700 episodes of The Young and the Restless as Ashley Abbott. I remember her from watching the show with my grandmother more than 20 years ago, but it was my wife that instantly recognized her. To quote my wife, “She should replace Candace Cameron Bure in all those Hallmark movies.” Their kids were played by Kennedy Tucker (as Alana’s daughter, Samantha) and Michael Varde (as Johnny’s son, Max). Both gave very compelling performances given their limited resumes. I look forward to seeing both of them in future roles. While I think they’d be stellar in non-Christmas movies, I’d love to see Tucker appear in more cheesy holiday romances, she was perfect. I do feel like Varde was robbed because he wasn’t included on the one sheet for the film, he was replaced by Trevor Stines (who plays Lucas) and I thought this was disappointing given the way the film goes.

There’s one more cast member that we need to talk about. I actually reached out to try and get an interview with him because he stole the entire movie. Tim Abell played Nick, a garage owner that gives Max a job. He elevated the movie so much so that I would have given the movie 3.5 stars if not for his performance. He is the comic relief of the film and every time he opens his mouth, you laugh. I want to talk to him about the role and his lines. I’ve added him to my list of actors to go back and revisit their back catalog because his performance was top notch.

At the end of the day, you have a comedy that is both cute and funny. I highly recommend checking it out… it’s one of the better Christmas films I’ve seen in the cheesy holiday film genre.

It is available on DVD and Digital on November 3. 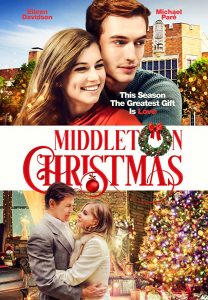 Movie description: Vivacious high school senior Samantha finds herself attracted to Max, the quiet new kid at her prestigious private school, Middleton Prep. The trouble is: Sam already has a boyfriend, basketball star Lucas. While Sam wrestles with her feelings about both guys, her mother, school dean Alana, recruits Max and his father Johnny, the new maintenance man, to help out with a Christmas fundraiser that could save the school from being closed. But when Sam’s life is threatened in a serious car accident, Alana and Johnny grow closer, even as Max and Lucas both realize how much they each care for her, culminating in a decision that will change their lives forever. With Christmas approaching, everyone in Middleton must question their values about sacrifice, family, and love -- and learn what it means to just be thankful for another Christmas.