The Mission: Impossible franchise has spanned 22 years. I was a teenager when the first film came out and I can fondly remember watching Mission: Impossible time and time again. Tom Cruise is one of those classic action movie stars that typically puts on a good show and, film after film, the supporting cast members have been amazing. Two highlights for me have been Ving Rhames, an underrated actor that I’d love to see in more films, and Simon Pegg, who joined the cast with Mission: Impossible III.  I wasn’t going to convince my wife to see this movie in theatres, so I pre-ordered it, ready to watch it the second it came out on VOD.

The film itself is divided into two parts. The slow moving, almost dull first half takes up over an hour of the movies 147 minute run time. I struggled to stay awake during this portion of the film. I felt like better editing could have saved at least 30 minutes and moved the first half along at a much better pace. The second half, filled with action, felt good. I was intrigued, engaged, and found myself inching closer and closer to the edge of my seat.  I thought this movie was better than Mission: Impossible – Rogue Nation, a weak point for the franchise, but the drawn out start of the film kept me from fully enjoying it. I will note that one commonality between Rogue Nation and Fallout is the writer/director, Christopher McQuarrie, which surprises me because I’ve really enjoyed most of McQuarrie’s other work.

The movie follows the typical MI layout: IMF is tasked with a mission (should they choose to accept it), something goes wrong, no one trusts them, they redeem themselves, they save the day. In this case, I found the con in the middle of the film to be rather enjoyable. I also enjoyed the final action sequence.

One thing I’m starting to wonder is if Tom Cruise is getting to be a little old for these action films. At times, he looked tired, at other times he looked like he was at the top of his game. Either way, he puts on an impressive performance but I wonder how much longer he’ll be believable in these extreme action roles.

In my mind, this film isn’t worth the purchase unless you’re a massive MI fan. It’s a worthwhile rental if you’re an action fan, but for most people this is better suited to be left until it shows up on a streaming service. I’d love to see a director’s cut of this film coming in at around 120 minutes. I think that there’s a lot that could be done to improve the film simply by removing a few unnecessary scenes. 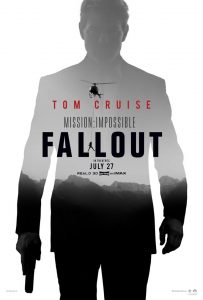 Movie description: On a dangerous assignment to recover stolen plutonium, Ethan Hunt (Tom Cruise) chooses to save his team over completing the mission, allowing nuclear weapons to fall into the hands of a deadly network of highly-skilled operatives intent on destroying civilization. Now, with the world at risk, Ethan and his IMF team (Simon Pegg, Ving Rhames, Rebecca Ferguson) are forced to become reluctant partners with a hard-hitting CIA agent (Henry Cavill) as they race against time to stop the nuclear fallout.

Chris Pine has been in a lot of excellent films over the years. Seeing him in The Contractor reminded me that not every film will be excellent. That’s not to say that The Contractor isn’t a good […]