My wife and I were looking for a casual watch, something mindless and fun. While I get a lot of films sent to me, which occupies most of my movie watching time these days, I don’t get a lot of comedies, which happens to be my favourite genre. So, we jumped on Netflix and I convinced her to watch David Spade’s The Wrong Missy. I’ve been a David Spade fan since SNL, so I try to watch anything he appears in. I also thought his last Netflix film, Father of the Year, was great.  So, my wife apprehensively agreed to start watching the film, saying she’d just leave the room if she didn’t enjoy it. She ended up loving it, we laughed so hard the entire way through.

The Wrong Missy features David Spade and Lauren Lapkus (instantly recognizable as Denise from The Big Bang Theory). Spade’s Tim Morris is up for a promotion at work after an acquisition and is hoping to win over his new boss at an upcoming company retreat in Hawaii. After a nightmare first date with a woman named Missy (Lauren Lapkus), Tim meets Melissa (Molly Sims) aka Missy. Tim’s best friend and colleague, Nate (Nick Swardson, who I’ll always remember from his role in I Now Pronounce You Chuck & Larry) convinces him that he should bring a plus one. A text is sent to a contact named Missy to invite her on the trip and she says yes…but which Missy is invited? That’s where the movie really gets going. You end up with a full on comedy that integrates aspects of a romcom.

When I say that, I should clarify. A romantic comedy is a comedy, but it’s not usually laugh out loud funny… it’s cute and sweet. This film is laugh out loud funny. It is “pause the movie because you have tears in your eyes from laughing so hard” funny. The romcom elements feel like an afterthought, but they fit in quite nicely. It’s hard not to enjoy this movie and I’ve spoken to a few colleagues at my day job who have all agreed that they thought it was very entertaining.

I don’t want to spoil too many of the gags in the film, I feel like that would ruin the watching experience, but I do want to talk about the casting. The film features so many Happy Madison Productions mainstays like David Spade, Nick Swardson, Rob Schneider, and Jonathan Loughran as well as lesser known frequent flyers like Robert Harvey and Allen Covert. It also featured much of Adam Sandler’s family including his wife, Jackie, and their two daughters, Sadie and Sunny, as well as his brother-in-law, Chris Titone, and nephew, Jared Sandler. Finally, Chris Farley’s brother John Farley is also in the film. Add in Molly Sims, Lauren Lapkus, and Sarah Chalke (Scrubs) and you have quite the cast. It doesn’t end there, however, as Jorge Garcia (Lost, Hawaii Five-O) and Vanilla Ice also make appearances.

If you go into this, know that you are getting a classic Happy Madison Productions film. That production company feels like a giant family, one that I would love to be a part of. The director, Tyler Spindel, also directed Father of the Year and the writers also wrote The Do-Over. The thing that I love about these films is that you know exactly what you are getting into and exactly what to expect. Sometimes they aren’t quite as funny as you want, but you know you’ll laugh, and you know you’ll appreciate the chemistry on screen. This one was funnier than I expected and such a fun ride. One of my favourite things about these films is that they always have so much heart. Even when they are over-the-top stupid funny, they still have heart and I think that might be one of the reasons why I appreciate their films so much.

At the end of the day, when you’re looking for something to watch The Wrong Missy is a solid choice. It’s on Netflix, so log in, make some popcorn, curl up and enjoy! 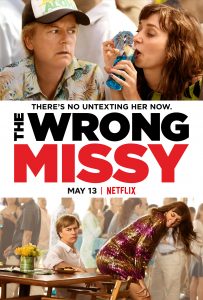 Movie description: When Tim Morris meets his dream girl and their relationship quickly escalates through texts, he throws caution to the wind and invites her to his company’s corporate retreat on an island resort… However, when a past blind date from hell shows up at the airport for the weekend getaway instead, he learns too late that he’s been texting “The Wrong Missy”.