With this trilogy (Volume 1 Review, Volume 2 Review), I keep coming back to the fact that it fills the hole in my heart left by the cancellation of cons worldwide. Earlier this year I missed Toronto Comicon, I also missed Niagara Falls Comic Con and will soon miss Fan Expo Canada. I love going to this cons for the panels and hearing behind the scenes stories. Time Warp does a great job of bringing a bit of that back into the world. I actually think that this was the best possible time for the documentary trilogy to drop. It provides interesting insight into some of our favourite movies while also providing a list of films to watch to help past the time. Funny, silly, goofy films that, for many of us, make up the very core of films that we love.

In this part of the trilogy, we look at comedy and camp, two of my favourite aspects of film. A late night comedy is almost the perfect movie. They can be funny and depressing, raunchy and wholesome, all at the same time. They are lighthearted and easy to watch with a deeper meaning and intensity that is there if you want to see it. I found myself nodding a lot with the list of movies they included in this conclusion to the series.

As with the other parts, I’d like to look at the time allotted to each film. With a running time of 128 minutes, this movie was slightly longer than the previous two. We’re also getting 18 films, which is more than we’ve seen in the previous films. This means that we get 7.1 minutes per film and, since some films are allotted less time and merged, it actually feels like certain films get a lot more time. I think that pacing wise, this was the best of the three.

I feel like there’s a few movies that were guaranteed spots on this list including Fast Times at Ridgemont High, Clerks, Office Space, Super Troopers, and Monty Python and the Holy Grail. In the past week alone, I’ve heard three of these movies quoted and that’s pretty typical. Clerks is, in my mind, the masterpiece from this list. I am a Kevin Smith fan, but it wasn’t Clerks that first drew me to him, it was Mallrats. I was 13 when it was released and I remember seeing it for the first time and thinking it was the greatest movie ever. From that point, I was hooked on everything Kevin Smith. When I finally did get to see Clerks, I was blown away by it. Everything about it was incredible… not having it on this list would have been an insult to film. The other movies I mention above all equally deserve their spot. I can clearly remember the first time I saw each of those films and the many times I have rewatched them. Office Space was a staple of my final years of high school and start of college, some days I think it played on repeat… the printer scene is still one of the YouTube clips most often linked to me during a work day. Super Troopers came out while I was in college, and I’m fairly certain that not a month goes by where I don’t hear at least one person replace ‘now’ with ‘meow’. That’s part of what makes a cult film – the rewatch value and the quotability. These films become a part of our culture in a way that so many Hollywood blockbusters never could.

I recently watched You Don’t Nomi, a documentary on Showgirls, so it was nice to see the film mentioned again here. I have never seen it, but after watching You Don’t Nomi, I ordered it off Amazon and it is sitting in my movie pile, waiting to be watched. I think it’s rather amusing that two documentaries released in the same month, looked at this film… that alone helps you to understand the cult quality of the film.

There are movies that I have seen that I would not have expected to see on the list, but I can understand where they are coming from… films like Napoleon Dynamite and Kingpin. I had forgotten how amazing Kingpin was until they were discussing it on screen and showing clips. I also learned about a few films that I’ve already ordered, eager to see – Rock ‘n’ Roll High School and Best in Show are probably at the top of the list, both looked amazing and I’m not sure how I hadn’t seen them before. I also want to see Eating Raoul, Plan 9 From Outer Space, Glen or Glenda, and Hedwig and the Angry Inch. I’d say the worst part about this documentary has been the number of movies I want to see as a result of it… if nothing else, these films have been great advertising for the movies they discuss.

Finally, I was glad to see they included The Room as I think it has a special place in a lot of people’s hearts. I was also excited to see Greg Sestero on screen discussing the film, I think that was a nice touch.

At the end of the day, even though I wasn’t a huge fan of the second film in the series, I would recommend sitting down and watching this documentary. It is available On Demand and On Digital on June 23. 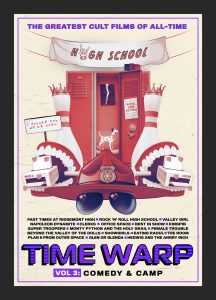 Movie description: The final volume of Time Warp digs deep into what makes us laugh over and over again as we reveal the greatest cult comedies and campy classics of all-time. From “Fast Time at Ridgemont High” and “Office Space” to “Monty Python and the Holy Grail,” and “Showgirls.”

I wasn’t sure what to expect when I sat down to watch a 2 hour film called The Marijuana Conspiracy that takes place in Toronto in 1972, particularly one based on a true story. The film […]

After I finished this film, I had to let it stew in my brain for a couple of days… I wasn’t quite sure what to make of it and, to be honest, I’m still not. […]