A few weeks ago, a colleague and I ended up having a rather in depth discussion regarding the films of Paul Verhoeven. We talked about the complexity of them, the social satire, and Verhoeven in general. It wasn’t long after that conversation that the opportunity to review You Don’t Nomi presented itself and the timing was too perfect – I knew I had to watch this documentary. I will preface this review by saying I haven’t seen Showgirls. I was 13 when it was released and there was no way my parents were letting me watch it. I did, however, see RoboCop, Total Recall, and Starship Troopers when I was younger. In fact, my parents rented me RoboCop for my 7th Birthday… somehow that was acceptable for a 7 year old, but Showgirls was inappropriate for a 13 year old. Anyway, that’s clearly not the point of this review, instead we’re talking about You Don’t Nomi. The documentary describes itself as a retrospective of the work of Verhoeven with a main focus on Showgirls. I would not consider this a retrospective, so if you go into the film expecting to discuss all of his work, prepare to be disappointed. Instead, the documentary simply uses his other movies as comparison points for Showgirls.

One thing I want to address first is the style of this documentary. It was unlike any documentary I’ve seen before. It worked Showgirls clips into other Verhoeven movies in really creative ways. If a scene from Total Recall had a TV, it may display a clip from Showgirls or a review of Showgirls. It was really interesting and would have been great as an addition to the typical documentary. This was not, however, your typical documentary. In a documentary, I expect a mix of archival footage, in person discussions, and any activities involved in the research. You may not have all three of these, but typically you have at least two. This did not have that. It was clips from Verhoeven’s movies (along with a few others) and photographs. When I watch a documentary, I enjoy seeing the person talking at least some of the time. You get their expression, their animation, and their personality. Not once did we see someone speaking on screen unless it was some of the very limited archival footage. It was weird to just have disembodied voices talking the entire time. This was definitely a downside to the film, I would have rated it higher if not for this.

The documentary itself is very interesting. They had archival footage for some of the cast and crew, but none of them were interviewed for the documentary. I’m not sure if the film was too small to reach out, they declined, or it was out of budget, but I was surprised that none of the cast was involved. The film is both a love letter and hate mail directed at Showgirls. It shows us the positives and the negatives and never really comes to a conclusion, it just lets you decide for yourself. I think this is an interesting way to handle it and I loved hearing the diverse opinions on the film. If anything, this documentary serves as an advertisement for the movie. I feel like I need to see the film after watching the documentary, just to understand all the opinions. That said, it’s apparently impossible to find the film. It’s not on iTunes or any streaming service, there’s no new copies on Amazon that play in North America. So, if like me, you’ve never seen the film, it may be difficult to find, but I feel like the documentary would be much more interesting if you have seen the film. That said, you can still enjoy it without seeing the film – I did.

Check out the film On Demand and Digital on June 9. 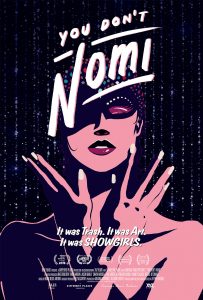 Movie description: In YOU DON’T NOMI, a chorus of film critics and fervent devotees explore the complicated afterlife of 1995’s biggest film flop, Paul Verhoeven's salacious Showgirls, from disastrous release to cult adoration and extraordinary redemption. The film features Adam Nayman (Vice Guide to Film), April Kidwell (I, Nomi) and Peaches Christ (Milk) as well as archive interview footage with the cast and crew of Showgirls.

When I turn on a horror movie, I’m not looking for much other than to be scared and entertained. The Shed eventually succeeded in providing both of these elements, but it was trying at times to […]