Ida Red has a highly recognizable cast. That’s probably the biggest draw to the film because the synopsis doesn’t do it justice. The film is actually pretty good, but you need to dig a little deeper than the two sentences put out by the studio. You have highly recognizable names like Josh Hartnett and Melissa Leo alongside Frank Grillo. Grillo is an interesting actor. He reminds me of Steven Seagal post 90’s, just constantly releasing films. Grillo must be one of the hardest working people in Hollywood. On top of that you have Sofia Hublitz from Ozark, Mark Boone Junior from Sons of Anarchy, the legendary William Forsythe, recognizable from everything, and rapper George Carroll aka Slaine. Finally, you have everyone’s favourite vampire and confidant to the world of super heroes, the fantastic Deborah Ann Woll.

So, what is the film about? It’s about family. Honestly, with more cars and ridiculousness, the theme could have come from The Fast and the Furious franchise. The film follow’s Hartnett as Wyatt Walker, the son of imprisoned crime boss Ida Red (Leo) who has been in prison since a job went wrong… a job that killed her husband. Wyatt is doing the best he can to keep the family business running with the help of his uncle, Dallas (Grillo). The family is rounded out with Wyatt’s sister, Jeanie (Woll) who wants nothing to do with her mother or the family’s history of crime, that’s probably why she married a cop (Carroll). The film follows the Walker family as the walls close in, as Wyatt’s brother-in-law, working with the FBI, works the case, trying to put away his own in-laws. There are heists, shootouts, touching family moments, and a decent story line all mixed together to make a fun little film.

While the male characters, particularly Wyatt and Dallas are clearly the focus of the film. It was the women of the film that really impressed me. Leo, Woll, and Hublitz all gave fantastic performances and they all played strong characters. While they had that strength in common, they were all strong in their own ways. I think the film was setup in such a way that a sequel could easily follow. I even have a title in mind for the sequel. I’m not sure if it would be considered a spoiler, but I think “Darla Red’ would make for a great follow-up film.

I will say that the film’s conclusion was probably the best part. It is definitely one of those films that gets better as you get into it. I wasn’t entirely convinced out of the gate, but by the end, I was really glad I had stuck around. There was even a moment that brought a few tears to my eyes, something that doesn’t often happen in this type of crime drama, but I think they had such a unique way of closing out the story that it was hard not to get pulled into the moment and live it along side them.

Ida Red is available on digital and on demand. 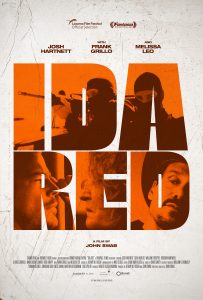 Movie description: Crime boss Ida "Red" Walker (Oscar winner® Melissa Leo) turns to her son, Wyatt (Josh Hartnett), to pull off one last heist to get out of prison. But with the FBI closing in, Wyatt must choose between family and freedom in this high-octane thriller.

This needs to be said right off the bat – this film was inspired by a true story. I don’t think that can be emphasized enough and, as such, needs to be mentioned out of […]