I loved the first part of this documentary trilogy. I wasn’t as impressed with the second part. It is still quite interesting and I learned about movies I hadn’t seen (and now want to see). I still love the style of this series, it feels like I’m at a con listening to the celebrities tell behind the scenes stories. In that regard, it is very well put together and a lot of fun to watch. As with the first one, Danny Wolf does a great job of paying tribute to some of movie lovers most loved films. This time, however, it feels very rushed. It also highlights one of my pet peeves, the merging of the Horror and SciFi genres. This happens quite often and it always bothers me. I love both genres, but the fact that they are constantly grouped up reminds me that there was a time when they were considered fringe and abnormal aka not mainstream. These genres now produce a lot of mainstream content, but we still see them merged together on a regular basis and I think that a film paying homage to these genres could have done better. At this same time, doubling up the genres really made this part of the series feel rushed.

The first part of the trilogy comes in at 105 minutes and looks at 16 films, which gives you roughly 6.5 minutes per film. With the second film, we get 13 films in 83 minutes. We’re still getting nearly 6.4 minutes per film, it just feels more rushed. I don’t know if part of that is more screen time for the hosts (I didn’t track that), but everything felt like there was less time for discussion.

Looking at this movie list, it’s not one that I have a lot of love for. I suppose there was likely some bias in my last review because I was a fan of the majority of the movies included, so I was intrigued by the behind the scenes discussions. Here, the film lost me after the first few films. Occasionally, I was reeled back in but the inclusion of films like The Human Centipede, Liquid Sky, and Blade Runner was very distracting. I realize that it’s not about movies I love, but I was hoping it wouldn’t contain films that I felt were a disappointment. I suppose they are above average on their picks, but with a documentary, I find the subject matter has to really appeal to the viewer and, in this case, it just didn’t as much.

That being said, the documentary is still really good and worth a watch for movie lovers everywhere. I still enjoyed some of the behind the scenes discussions… particularly surrounding Dawn of the Dead, The Evil Dead, and Death Race 2000. While I’ve never seen The Brother from Another Planet, it is now on my list of movies to see. I’ve tried Blade Runner multiple times and never really gotten into it, but this made me want to give it another shot. So, ultimately, the documentary does exactly what it intends to do… it shines a light on popular cult films. I would have chosen differently and I would have made the film about 20 minutes longer, but I still enjoyed watching it.

Check it out on demand and digital on May 19. 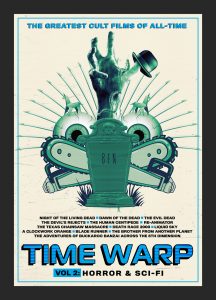 Movie description: The greatest cult horror and science fiction films of all-time are studied in vivid detail in the second volume of Time Warp. Includes groundbreaking classics like “Night of the Living Dead,” and “The Texas Chainsaw Massacre,” and sci-fi gems such as “Blade Runner,” and “A Clockwork Orange.”