The most recent Robin Hood film is like nothing we’ve ever seen from Robin Hood before. My initial thoughts were best summed up by the film’s star Taron Egerton, “To me, Robin Hood feels very pertinent to the world right now and I found the script very moving and funny.” There was definitely more humour in the film than I was expecting and it did feel like a very modern take on the film, with a few nods to the current political climate.

The entire film feels more like a prologue to the standard Robin Hood story. It follows Robin from before his time in the Crusades until he ventures into he forest. Little John is a Saracen fighter, who is grateful to Robin for action he took while fighting and acts, initially, as Robin’s mentor. Marian was excellent in the role and I loved how her and Rob (yes, his name is often shortened in the film) met and how they rekindled their romance.  Finally, on the likeable side of the cast, we have Friar Tuck, played by Tim Minchin. Minchin is immediately recognizable and his portrayal is amazing, I was very excited to see him on the big screen. The Sheriff of Nottingham and Will Scarlet, on the other hand, have darker sides. Will’s jealousy toward Robin is evident almost immediately and the Sheriff might just be the darkest version we’ve seen yet. One character that I felt was missing from this version of the tale was Prince John, taking the seat of King Richard during the Crusades – it was an interesting change to the story, but something I wasn’t expecting.

One of the things worth talking about are the fight scenes. They are quite epic. From interesting, “new” weapons (the “Arrow RPG” might have been my favourite) to cases of molotov cocktails, all sorts of modern techniques were incorporated into the fight. There were two big scenes, with one involving the Sheriff’s men and a group supporting Robin, while the other was the Saracens fighting the Crusaders. It was very interesting to see Robin on opposite sides of each fight – at least that’s how it felt to me. I couldn’t imagine being the fight choreographer on that film, it was on the scale of movies like 300 (without the CGI feel) and Braveheart (which I feel inspired this version of Robin Hood).

Finally, it’s important to mention that this film involves a heist scene. I go crazy for big heists in films, they are truly epic to watch. This one was no different.While I won’t go into specifics, it was worthy of any modern bank robbery, yet somehow completely believable for the time period. I called this a White Knuckle Flick in my ratings, not because it’s an intense thriller, but because I was on the edge of my seat for the entire heist, just waiting to see what would happen.

At the end of the day, even my wife, who didn’t want to watch the film, said, “Wow, that was better than I expected.” It was actually better than I expected. I was thinking that this would be a 2.5-star film, just a regular weekend action flick, instead it was thoughtful, entertaining, well-acted, and humorous. I’m still surprised by how many times I laughed out loud at various scenes and, honestly, I still just keep thinking about the “arrow RPG” and “arrow Gatling guns”. This film is worth checking out. I bought it on iTunes when it went down to $12.99 and I don’t regret the purchase, I feel like the rewatch potential when I’m bored and want background noise is actually quite high. The movie clearly opens the door for a sequel, so I’m really hoping we get to see it at some point soon. 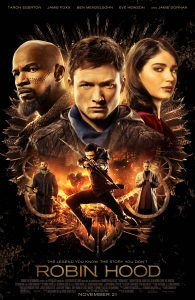 Finding Steve McQueen tells the “true story” of the 1972 heist of the United California Bank in Laguna Niguel by a gang from Youngstown, Ohio. I wrap true story in quotes because there’s clearly differences […]