I love movies. I love everything about them – the cinematography, the dialogue, the acting, the direction, the emotion… everything that makes that one special movie moment stand out in your mind and influence your life. I started this site because I would post my opinion of movies I watched on Facebook and several people suggested creating this. Since then, I’ve been lucky enough to work with some wonderful people and watch a plethora of films I otherwise never would have seen. While I haven’t enjoyed every moment of it, this has been an amazing experience. I’ve exchanged messages with directors, watched movies before the general public, and been able to influence (in a small way) people’s viewing habits. There’s no greater feeling than a message along the lines of, “I watched the movie you recommended and I loved it. I showed it to my buddies and we all thought it was great, thanks for the recommendation.” I may not be a major contributor to the film industry, but with this site, I feel that I am now, in some small way, a part of the industry that has shaped so much of my life.

That’s why I was very excited to discover Danny Wolf’s Time Warp: The Greatest Cult Films of All-Time documentary series. To see others talk about the films that I love with such passion was amazing and, in turn, this documentary is pretty amazing. I sat down to watch the first part of the trilogy and there’s so many good things to say about it.

The list of films already speaks to me. I would consider The Rocky Horror Picture Show, The Big Lebowski, and Point Break to be among my favourite films. I’m also a big fan of The Warriors. So the film choices may have biased my review slightly, but I think anyone would enjoy themselves watching this one.

The film sits down with Joe Dante, John Waters, Ileana Douglas, and Kevin Pollak, who host this journey, and is interspersed with stories from critics, directors, and actors. I’m a huge fan of comic cons, I always love the Q&As where I get to listen to actors discuss the films they were in and directors talk about the movies they make. That’s what it felt like to watch this film. Hearing Barry Bostwick talk about playing Brad in The Rocky Horror Picture Show and Jeff Bridges discuss his portrayal of The Dude was surreal.

The film talks to these stars and directors of our favourite cult films about what makes a cult film, about what makes each of their movies so special and really resonate with fans. Not only did I find the film entertaining, I also thought it was quite thought provoking. Personally, I thought a lot about what I consider to be a cult film. I once said that Groupers had what it takes to be a cult film, and I still think that’s true. I think that a cult film is one that doesn’t fit into mainstream media’s mould. It is unique, memorable, and different. It is everything that the movies discussed in this documentary are.

I will admit that I only had a passing familiarity with some of these films and others I had not heard of at all. The documentary does such a great job at framing the movies that it could very well be an advertisement for any one of them. It feels like a love letter to cult films; to the creators involved with making these movies. While watching the documentary, I purchased Coffy, Foxy Brown, Freaks, and Harold and Maude. I had heard of these films before, but I hadn’t seen them. I actually encountered Freaks at the Art Gallery of Ontario’s Guillermo del Toro exhibit in 2017. His collection included sculptures of several members of the cast and I later learned that he counts it among his favourite films. To hear the movie discussed, to see clips, to understand more about it made me want to see it even more.

If you’re looking for a way to spend 95 minutes, this documentary should be at the top of your list. If you’re a film buff or a casual consumer of entertainment, you will find this documentary entertaining, enlightening, and excellent. Check it out on demand and digital on April 21, 2020. 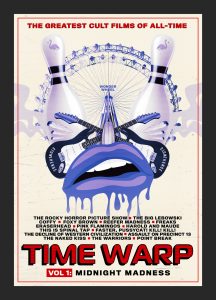 Movie description: From “The Rocky Horror Picture Show” to “The Big Lebowski” and everything in between, this fascinating deep-dive documentary begins its celebration of the greatest cult movies of all-time discussing the birth of the midnight movie.

I’m feel like I’m slipping a little. In 2017, I watched A Christmas Prince the day it was released. After all, it had iZombie‘s Rose McIver and I was a huge fan of that show and […]