For what it is, Primal is a 5-star film. It may have a November release date, but it is 100% a summer popcorn action flick. It is the type of film that I would have watched with my dad 20+ years ago on a Friday night after my mom and sisters had gone to bed. I was hooked from the opening scene and the only time I really lost focus was when the horrible CGI jaguar was involved. Even then, eventually I was so caught up in the film, that it wasn’t as distracting as it initially was.

I love anti-hero films and Nic Cage is the perfect anti-hero in this film. He’s so easy to hate, yet not the villain. Putting him opposite Famke Janssen as the “goody goody” doctor was a great casting decision and the two play really well together on screen. The best casting in this film, and I say that given my love of Cage, was definitely Kevin Durand. Anyone who has seen The Captive knows just how creepy this man can be. He nails it once again in Primal. I was surprised while reading the director’s notes for the film that although Durand was his first choice, he wasn’t initially considered. This is the type of role where I find he shines and I know I’m going see an amazing performance whenever I see his name in the credits. As an added bonus, he and I were born in the same city.

Another interesting discovery from the directory’s notes was that the majority of the film was actually shot on a ship. I can only imagine the realism it added for the actors and I know that I was quite impressed with the ship backdrop throughout the film, so it definitely lent itself to the film quite nicely.

The movie itself is about a big game hunter (Cage) who hunts animals to sell them to Zoos. He is transporting his prizes on a cargo ship that also ends up carrying a government trained soldier guilty of numerous assassinations (Durand). I thought that the reasoning for moving Durand’s character by boat was a bit of a stretch, but it allowed for the inclusion of Janssen’s character. Of course, things go wrong and our assassin escapes, putting the crew of the ship at risk. The movie has plenty of action and a few decent fight scenes. There are a few surprises that I definitely didn’t expect (and will not spoil) and one of the coolest parts of the movie was definitely watching Cage work with a blowgun.

If you’ve been missing the classic action flick, this movie is a great throwback to those movies of the 80s and 90s. It’s fun, it’s exciting, and it’s just ridiculous enough to get you hooked. I highly recommend checking it out, especially if you’re cooking or playing video games. This is one of those movies that doesn’t require 100% of your attention, which makes it perfect for a multi-tasked viewing. Check it out in theatres and on demand on November 8. 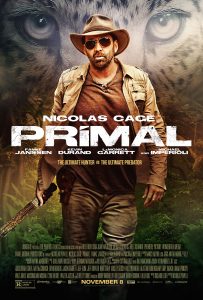 Movie description: When Frank Walsh (Nicolas Cage), a hunter and collector of rare and exotic animals, bags a priceless white jaguar for a zoo, he figures it’ll be smooth sailing to a big payday. But the ship bearing Frank’s precious cargo has two predators caged in its hold: the cat, and a political assassin being extradited to the U.S. After the assassin breaks free – and then frees the jaguar – Frank feverishly stalks the ship’s cramped corridors in hot pursuit of his prey, right up until the thrilling, unpredictable climax.