Triggered. These days, there’s a lot of power in that word. I thought maybe it was just a weird coincidence that a movie named Triggered involved a bunch of Gen Z (or Millennial according to the director) college students expressing years of internalized emotions while being blown-up by crazy bomb vests. After all, there’s not always a lot of investment in deep thoughts or thought provoking elements within indie horror films. I was pleasantly surprised to read director Alastair Orr’s statement and realize I was wrong.

I thought it would be hilarious to see sensitive, woke, SJW millennials being thrown into a grizzly death match, where they are more concerned about their own superficial feelings than the game that their tormentor wants to play. We’ve seen countless contained thrillers where strangers wake up in a room and they have to work together to get out of, or kill each other before the clock hits zero. I always found that this was a wasted opportunity. It’s so much easier to kill or torture someone you don’t know. If you put a family member, or friends, in this kill or be killed scenario, aren’t you going to get so much more mileage, so much more irony and twisted humour?

In Triggered, we find ourselves looking at a group of high school friends reuniting after being away at college for a weekend of partying and drinking in the woods. We very quickly establish that they are not particularly close and I wondered why they were even friends at all. We learn that they were all brought together by a friend who passed away in high school and they are still drawn to each other. If it’s a misplaced sense of honour toward their dead friend or the fact that they are so horrible that no one else wants to associate with them is never really revealed. Although, given the type of film, I’m going to go with the fact that they are horrible people.

While I thought I was signing up to review a cheesy torture porn flick, I was surprised at just how thoughtful and well done the film was. This was a movie where I was very disappointed that I didn’t get the opportunity to sit down and have a conversation with the director or the writer. I think that the movie was a lot deeper and a lot more meaningful than most people will give it credit for. We got a dark, somewhat humorous, slightly raunchy film involving a lot of death and gore that, at the very bottom, actually had a little bit of heart. While I enjoyed the action and watching the “game” unfold, I also enjoyed watching the character growth and different personas that the characters had. If any of the cast or crew find themselves reading this and are interested in speaking to me, I’d love to have a conversation about the film and your thoughts around the production, please reach out to me.

So, what is the game? These friends (or “kinda sorta friends”) are gassed and wake up wearing metal bomb vests that cannot be removed. Each person has a timer on their vest and the timers are all very different. When someone dies, the person closest to them “inherits” their remaining time. You might say, who would kill their friends just to live a few minutes longer, but you’d be surprised by the psychological change that happens inside you when there’s a sense of urgency and a ticking time bomb definitely creates a sense of urgency. If you think about it, it’s the same techniques used by stores and websites to inspire additional purchases with “limited time offers” and “1-day sales”. It’s the same technique used by influencers and YouTubers who do “merch drops” and phishers who send you fake emails about your bank account where you “must act now”. It’s a useful technique across the sales and marketing world and apparently quite deadly when applied to films with bombs.

When it comes to indie films, this one has to be in my top 10 list for the year. It’s not quite on par with Archive or Last Call, but, unless I’m reading too deeply into what was supposed to be a superficial story, it had so much more than I expected it to have. I only have one complaint, which is that the movie was clearly supposed to take place in the United States, but the single vehicle we see in the film is clearly a right hand drive vehicle because they filmed in South Africa. However, the characters didn’t have South African accents (which is where the cast is from) and one of the characters was attending MIT (and didn’t mention flying across the ocean for a camping trip), so an American locale was implied. It’s a minor scene at the end of the film, but it did immediately pull me out of the experience and is the only reason I didn’t give the film 4.5-stars.

While watching the film, I hope the audience jumps on board with the crazy situation the characters find themselves in. You can either route for the good guys, or you can just sit back, relax and watch the detestable characters blow themselves up in the woods. The film doesn’t take itself seriously and the audience shouldn’t either. It’s quick, it flirts with bad taste, and should be swallowed in one quick shot… like tequila at a frat party! Enjoy.

I wanted to close with those words from Orr because they contradict how deeply I interpreted the film and I think they shine a very different light on the movie. Had I watched it from his point of view, I feel like I would have enjoyed the movie less, but that’s one of the great things about movies… they are open to interpretation.

Samuel Goldwin Films will release Triggered On Demand and Digital on November 6. 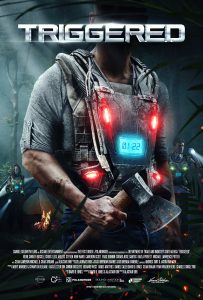 Movie description: Nine friends, all harboring a dark secret, go camping in the woods. After a wild night of partying, they wake up with SUICIDE BOMBS strapped to their chests, all with varying times on their countdown clocks. They decide to work out how to disarm the bombs or find help - until they discover they can 'take' one another's time by killing each other.