If ever there was an indie film worthy of your support, it is Last Call. The film is the purest and simplest form of entertainment – a phone call between too people. At the same time, it is a technically complex film with an emotionally driven script that is executed perfectly. The film is dark, it is deep, and it has more heart than every Hollywood blockbuster released this year.

When a suicidal man, Scott (Daved Wilkins), misdials the number for the suicide hotline, he connects with a night custodian, Beth (Sarah Booth), at a college. What follows is one of the most intense and charged conversations I have seen as the custodian, a single mother with her own problems, fights with everything she has to save a stranger’s life. As I watched the film and in the days since, I’ve had The Fray’s How to Save a Life playing on repeat in my mind. It wasn’t in the film, which featured an amazing song by SYML, an artist I recently encountered in Chemical Hearts, but was otherwise unaware of.  The reason that I keep hearing The Fray is because I keep thinking of Beth and what must have been going through her mind.

I’ll be honest, when I requested this film, I did so without a thought toward the plot. Instead, I was focused entirely on the idea that a film could show us both sides of a phone call, simultaneously, and shot as a single take. Allow me to reiterate. This movie was filmed in two locations simultaneously. There were no takes, there were no do-overs. The cameras started rolling at the start of the film and didn’t stop until they were done. Think about how many times you retake a family picture or stop and start a film for Instagram or Tik Tok. They didn’t have that option. That blows my mind away and is the only reason I wanted to see the film. I believe that my original comments were, “It’s just a phone call, it may not be that good… but the shooting concept makes me want to see it.” I’m glad it did because I’m happy to admit I was wrong. The movie was amazing.

There’s the advantage of not being able to yell cut, so you just kinda roll with it.

When I finished the film, I was so impressed that I had to reach out to ask about an interview. One advantage to writing for this site for myself is that I control what I do. In this case, I wanted to meet the people responsible for a film that brought me to tears and left my wife’s mouth agape. I was surprised when my request for an interview turned in to an actual interview and I found myself on a Zoom call with co-writers David Wilkins (who also plays Scott) and Gavin Michael Booth (who also directs the film).

It’s weird because it was an incredible challenge and an incredible 14 days of stress but at the same time it was a very small crew. We had no more than ten or twelve people around every day and part of it just felt like making a movie with your friends. So, it’s a weird combination of feeling equally the most stressed ever but at the same just very relaxed because everybody we had on the crew was there just working really hard and we had a great team of problem solvers.

I’ll admit, much of what I asked will not appear on this page. I don’t like to mention spoilers and a lot of what I asked about was the films conclusion. That was just for me as selfish as it may be, but I was, however, curious about the inspiration and the decision to go with a wrong number. Regarding the inspiration for the film, Wilkins mentioned that he was inspired by a friend of his who had volunteered for a crisis hotline and that the idea came together as he asked them questions about it.

I couldn’t imagine a more raw and basic bit of humanity than two strangers talking where one doesn’t want to live and the other one wants them to.

When I asked about the wrong number, which is clearly the point of the film that makes it so amazing, Gavin shared their reasoning.

The more we researched what happens on a suicide hotline call. They have very strict protocols and a very specific script that they stay on that is ultimately successful. It’s either within a limited amount of time the person agrees to get off the phone but stay safe or they have the ability to trace a phone number and send the police or somebody to do a wellness check on the person at their address.

The movie is, as I said originally, quite simple conceptually. It is a conversation between two people – someone who wants to die and a stranger who becomes invested in their well-being. The dialogue is filled with give and take, with missteps and course corrections. It is messy and honest. It feels like real life. I walked away from the film with so much respect for Beth and a hope that if I were to find myself in a similar situation that I would be brave enough and strong enough to have the conversation she had, to take the steps that she does. Beyond opening up a dialogue on a serious and socially taboo issue, the film was inspiring. It’s hard to look at Beth and not want to be a better person. She clearly has so much shit going on in her life, yet she carries on and fights for Scott every step of the way. It’s a movie you need to experience so that you can truly understand how powerful it is.

It was my biggest hope for this movie. That it would be a conversation starter about mental health, about suicide, about these subjects that people are either embarrassed, afraid, or ashamed to talk about.

The one thing we wanted to do was make sure we pay a great deal of respect to what mental health care workers do and just people that are afflicted with mental health conditions.

I was very impressed to learn that the producers of the film teamed up with their distributor, Mutiny Pictures, and the Canadian theatre chain Imagine Cinemas to donate 100% of the first week box office run in Canada to the Canadian Mental Health Association. I can’t match their generosity, but in honour of the last day of National Suicide Prevention Month, I donated $250 to CMHA. If you wish to do the same, you can donate here.

I am, without a doubt, now a life long fan of both Gavin and Daved, as well as co-star Sarah Booth. I’m looking forward to more from them in the future.

Last Call will be available on VOD on October 27 for those interested in a more standard viewing method. If you are interested in seeing it sooner, and I highly recommend that you do, you can watch the movie via the Laemmle Virtual Cinema or on Altavod. 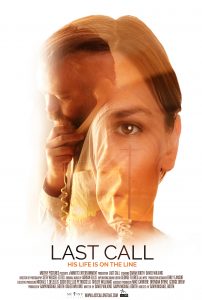 Movie description: Shot in two true single takes, filmed simultaneously in two different parts of a city, Last Call, is a real time feature presented in split screen showcasing both ends of a wrong number phone call that has the potential to save a life. Last Call follows a suicidal alcoholic on the anniversary of his son’s death. When he attempts to call a crisis hotline, a misdial connects him with a single mother working as the night janitor at a local community college. The split screen feature showcases both characters in real-time as they navigate a life-changing conversation.