I always find that the higher I rate a film, the less I want to write the review. I don’t want to spoil the movie and I’m worried that any discussion will provide hints that would otherwise be overlooked. Archive is definitely a film where you don’t want to read spoilers, it’s important to go into the film without having heard anything about it and, I promise, you will not be disappointed.

The story is actually very interesting and I’ll boil it down to a thought I had during the movie. It is a situation where the lead character only asks if he could do something, not if he should. Most of the movie involves George Almore (Theo James) on his own. In some ways, he feels like Matt Damon in the Martian. James does a great job with the character and Rothery wrote a really interesting story. In fact, Gavin Rothery, the writer/director, needs to be commended for everything about the film. He did a fantastic job. After watching the movie, I read his director’s statement, which I would normally quote. I don’t want to reveal what he was thinking, but I will say that the vision he had going in was so clear that I can see why the end product was so fantastic.

One of the things that impressed me about Archive was the visuals. It was beautiful in every way. The setting, the buildings, the Sci-Fi elements like the robots. Everything about it was so well constructed. Rothery is an artist, you can view some of his work on ArtStation.  He was a concept and production designer on Moon and did spaceship vehicle concept art for Star Citizen. He has an impressive resume and it shows in Archive.

The story itself is brilliant and the more I think about it, the more I find myself falling in love with it. I’ve been re-reading this as I write and I realize that, at this point, the review feels like paid promotion. I can assure you that it is not. I loved the movie, I loved the interactions between George Almore and the robots he builds. I love the emotion, the sensitivity, and the story. My wife, who tends to edit my reviews and, as such, watches the films with me, already wants to rewatch it and purchase it. It was entertaining and had us captivated the entire way through, but within the last 20 minutes the movie goes from great movie to storytelling masterpiece. I don’t want to oversell the film and, as I said, I don’t want to ruin it. So I’m going to simply say, at this point, watch the movie. You will not be disappointed.

Archive is available in Virtual Cinema Screenings, On Demand and Digital on July 10. 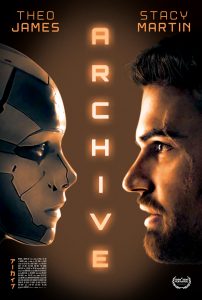 Movie description: 2038: George Almore is working on a true human-equivalent AI. His latest prototype is almost ready. This sensitive phase is also the riskiest. Especially as he has a goal that must be hidden at all costs: being reunited with his dead wife.

Kurt Russell as Santa Claus. That could literally be the entire review. So far, everyone I’ve mentioned the film to has immediately said they were going to watch it for that reason alone. The casting […]

I’m a fan of Sherlock Holmes, but I’ve never been a die hard fan. I don’t own the complete works of Sir Arthur Conan Doyle and I haven’t read every story, but I’ve enjoyed the […]