When I showed my wife the trailer for First Date, she asked if I was sure it was a modern movie, she thought it felt like it was from the late 90s. We’ve seen, during the pandemic, that films more than a decade old have been picked up for distribution, so it wouldn’t be impossible that First Date was filmed 20+ years ago and was just now seeing the light of day. It turns out that it is a new film, but the filmmakers behind it wanted to create that vibe.

We wanted to make an independent flick, the kind that had a certain kinship to many of our favorites from the 90s and early 2000s, but that still felt exciting and fresh. Something with youthful energy, but also with bite to it. Something that could mix comedy, suspense, romance and violence while feeling like a natural blend. Kinda like mixing all the different sodas at the soda fountain. You’re not supposed to do it but damn, it’s a sugar rush. Something that would allow us to play with special effects and spotlight a unique ensemble cast. And also something that we would have seen when we were just getting into filmmaking, and been stoked about.

I thought that was amazing when I read it in the director’s notes. These guys created a movie that that feels like a film from one of my favourite eras of cinema. A film from before you needed motion blur, tens of millions of dollars worth of special effects, and an idea stolen from comics or previous movies because you have none of your own. I have to say that they nailed it. They gave me a movie that was fun, that was highly entertaining, and that I would want to watch with friends. The reason I started reviewing films was to be able to recommend great films to my friends and this film is 100% on that list.

The end result? A movie with layers for those searching for them- but also a thrilling ride for those who want entertainment. The characters and story within have deeply personal meanings for us, but we also hope that viewers will take away their own meanings from them too. The highest honor for us would be that this movie ends up on the shelf of a fellow genre cinephile, having their own movie night with friends, and saying “Have you heard of First Date? ….. Oh, you GOTTA check this one out!”

You did it, you definitely did it.

The film starts like your typical teen comedy. Guy likes girl. Guy is shy but girl asks him out. Guy needs transportation for the evening. Welcome to the worst night of your life. The film has everything – romance, comedy, and action. There are so many moving parts that it feels like there are two movies. The first half, where you get more of the teen romcom feel, and the second half, when the action ramps up, feel completely disconnected but also fit so well together.

One burning question that I have, and I’m hoping Crosby or Knapp will see this and let me know, is if the phone number displayed on screen (and you can see this in the trailer if you want to check it out) was intentional. The number that Mike (Tyson Brown) dials when calling Kelsey (Shelby Duclos) is 555-1138. I want to know if this is a nod to George Lucas or pure coincidence. That jumped out to me watching the trailer and again when I watched the film and, for some reason, I just can’t shake it.

The film gives us bumbling criminals, over the top cops, and the start of a teen romance that seems like it can weather any storm. I highly recommend giving this film a go.

First Date will be released in theatres and on demand on July 2. 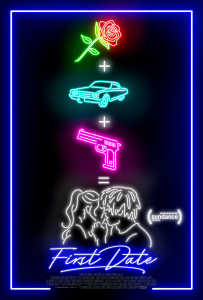 Movie description: Shy highschooler Mike finally summons the courage to ask out his badass neighbor Kelsey, only to realize he’s missing a key element for a successful date - the car. Panicked and low on cash, he’s conned into buying a beat up ‘65 Chrysler. Mike's plan to win over Kelsey soon turns into a surreal misadventure when they are inexplicably targeted by a pair of cops, a criminal gang, and a vengeful cat lady. A night fueled by desire, bullets, and burning rubber makes any other first date seem like a walk in the park. In this perfectly executed throwback thrill ride, directing duo Manuel Crosby and Darren Knapp deftly weave together elements of dark comedy, teen romance, shoot 'em up action and classic coming-of-age story, creating a truly entertaining ride that never misses a beat. This refreshing mix of tones, coupled with a break-out performance from Tyson Brown as Mike, make FIRST DATE a truly outstanding first feature.