I recently watched The Reef: Stalked and said I would never watch another low budget shark film again. It just didn’t seem like something I wanted to tackle as the genre has been played out for years and there hasn’t been an original idea in quite a while. Then, however, I saw Maneater and the film featured Shane West and Trace Adkins. I have long said that A Walk to Remember is among my favourite films, which means that I’ll watch anything with Shane West and, as a fan of country music, I love seeing country singers show up in films, so I had to give this a chance.

If you can only watch one of these films, Maneater  is definitely the better option. The cast is surprising for a film like this because we get the highly recognizable Jeff Fahey in addition to West and Adkins. We also have Nicky Whelan as our lead and, while I didn’t recognize her by name, she’s had guest spots on a number of my favourite TV shows over the years. The cast all did a fantastic job given that writer/director Justin Lee gave them nothing to work with in terms of dialogue. It is surprising to me because Lee manages to get well known actors to appear in his films, but they are never very highly reviewed. I’m eager to see his film The Most Dangerous Game (if I can find it) because it stars Casper Van Dien, Judd Nelson, Tom Berenger, and Bruce Dern but the reviews for it haven’t been promising.

Back to the film at hand, however, we should probably discuss the biggest problem with Maneater (after the laughable dialogue), which is the two distinct stories that are shoehorned together to give us the final setup. The film starts with Adkin’s daughter being attacked and killed by a shark – a, you guessed it, maneater. While he fights to have something done about it, we get the second story which involves West, Whelan, and their friends renting a boat, skippered by Fahey, for a bit of R&R. The entire time, the shark is hunting, stalking anyone in the water, which, as you might have guessed, includes our friends out on the rental boat.

The remainder of the film is a game of cat and mouse with really bad special effects. At one point, when the shark attacks the victim, you can actually see the point where the real person disappears from the scene and is replaced by what looks like a poorly made scarecrow. The film has its moments, but it never really creates the tension you want from a thriller nor the scares that you would expect from a horror flick. Instead, you get a story that moves along but never really accomplishes much.

Ultimately, the film is really a vehicle for Adkins who shines throughout. I loved his character and would have been happy to watch just him the entire time. The extraneous scenes of the rental boat weren’t necessary for the tension and instead of trying to make a thriller, Lee should have made an action film that was entirely focused on Adkin’s character hunting the shark. While the film ends as you would expect, the shark gets what it deserves, the ending is left open for a sequel with Adkins character returning. I would watch that film, not because this film was spectacular, but because Adkins was. He really made the film worth watching.

Maneater was released in theatres, on digital, and on demand on August 26. 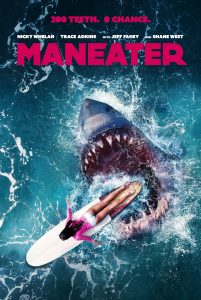 Movie description: Jesse and her friends' idyllic island vacation turns into a gruesome nightmare when they become the target for an unrelenting great white shark. Desperate to survive, she teams up with a local sea captain to stop the vicious man-eater before it strikes again in this heart-pounding thriller.