A friend, whose opinion I greatly respect, mentioned Stan & Ollie a couple of times and spoke very highly of the film, so I knew I had to check it out. This weekend finally presented me with an opportunity to watch this biopic about Stan Laurel and Oliver Hardy’s 1953 tour of the UK. A little word of advice right off the top, this film is listed on IMDB as ‘Biography, Comedy, Drama’, there are some laughs to be had (after all, it’s about Laurel and Hardy), but don’t go into this expecting a laugh out loud comedy.

To be honest, I went into this not knowing what to expect. While I’m familiar with Laurel and Hardy, I have not seen any of their 107 joint films, nor was I aware of the details surrounding their personal lives. The film starts with the two working on the film Way Out West for Hal Roach. It introduces us to their money problems and contract issues. We also see Hardy working without Laurel on Zenobia which is frequently referenced in the film as “that elephant movie”. We then jump forward 16 years and follow the duo on a tour of the United Kingdom.

The film is, in my opinion, a rather depressing look at what happens to celebrities later in life. It’s important to keep in mind that these weren’t just actors, they were comedic geniuses who created some of the funniest moments of that period. That said, I don’t think a lot has changed. We invite these people into our homes via television, music, and film. Sure, many become mega-rich, but we prop them up and then we let them fall by the wayside. Artists, comedians, musicians, and actors… they really impact our lives and this movie reminds us that we remember those experiences, while forgetting that the individual exists. The looks on their faces when they’re checking into a hotel and a comment is made that they must be playing at the wrong hall because the one they mention is small or other times when people comment that they thought they were retired are very disheartening.

At the same time, it’s a strong look at friendship and passion. The relationship between Laurel and Hardy is definitely strained at times, but it’s also filled with happiness, memories, and the magic of knowing that somewone is there for you. We get to see a friendship that stands the test of time, that cannot be defeated. I think nothing is more telling of this than the caption at the end of the film, that Stan Laurel retired when Oliver Hardy passed away, yet he continued to write for Laurel and Hardy until his own death. This thought alone moved me, because if that doesn’t say friendship, I’m not sure what does.

We also need to talk about the actors portraying Laurel (Steve Coogan) and Hardy (John C. Reilly). I’m not familiar with Coogan, but he gave an amazing performance. Reilly, on the other hand, is someone I’ve seen in plenty of films and, while I think of him as a great comedic actor, I’d never really considered him to be a great actor. This movie changed my mind, Reilly was AMAZING. I’m not sure why this guy doesn’t do more serious roles, he’s got a number of more serious films in his younger days, so maybe he should return to that. He was nominated for a Golden Globe for Best Actor – Motion Picture Musical or Comedy for this performance and I think he should have won (although I think this film barely fits the category of comedy as I mentioned above).

It took me two viewings to fully watch this film. I found myself tired and not fully enjoying the movie when I started it, but I picked it up today and loved the film. I loved the performances, the interactions between the characters, and the emotion of the film. By the end of the film, I found myself tearing up watching their final performance. I have to wonder if those audience members realized they were seeing the final performance of Laurel and Hardy. My wife and I went to the kick off of Sharon and Bram’s final tour, which closes at the Mariposa Folk Festival in July. There’s something special about being there for the final performances given by someone who greatly impacted your life. I know what attending that show meant to my wife and I, so I can only imagine what it meant to see the final days of Laurel and Hardy.

Even if you aren’t overly familiar with Laurel and Hardy, as was the case with me, you will still enjoy watching this film. Just set your expectations appropriately and prepare yourself for an amazing story and a hell of a performance. 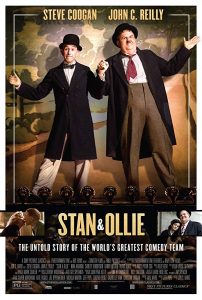 Movie description: Laurel & Hardy, one of the world’s great comedy teams, set out on a variety hall tour of Britain in 1953. Diminished by age and with their golden era as the kings of Hollywood comedy now behind them, they face an uncertain future. As the charm and beauty of their performances shines through, they re-connect with their adoring fans. The tour becomes a hit, but Stan & Ollie can’t quite shake the specter of Laurel and Hardy’s past; the long-buried ghosts, coupled with Oliver’s failing health, start to threaten their precious partnership. A portrait of the most tender and poignant of creative marriages, they are aware that they may be approaching their swan song, trying to rediscover just how much they mean to each other.