Sometimes, when you watch a film, there’s a scene so dark that it shakes you to your very core. I feel like that’s the only way to describe the opening scene of The Cleaning Lady, it set my expectations such that I had to pause the film and look for a bag, just in case I needed to vomit. I managed to avoid tossing my cookies, but I definitely felt like I needed a shower after finishing the film. To say it was creepy would be an understatement. Jon Knautz and Alexis Kendra wrote something that came from a place so dark that I don’t want to imagine it.

The film, originally titled Something Fierce, is based on a short the two wrote, also called The Cleaning Lady, which can be viewed on Vimeo. If you have not seen the short, I would recommended watching the feature film first and then coming back to the short as it is nearly a shot for shot cut from the middle of the film. It is interesting to see the roles shift from the short to the feature film. In the short, Alice is played by Elizabeth Sandy while Shelly is played by Alexis Kendra (one of the film’s writers). In the feature film, Kendra moves to the role of Alice, while Rachel Alig joins the cast to play Shelly and Elizabeth Sandy has a minor role as Helen, the wife of Michael (Stelio Savante), the man with whom Alice is having an affair. I think this is a great casting change because Alig kills it as Shelly, stealing every scene she is in. Also, there should be a shout out to Mykayla Sohn, who plays Shelly in flashback scenes and does an amazing job, despite starring in some of the film’s creepiest scenes.

As I said, the opening scene is very dark but we immediately transition to a much brighter scene and we meet Alice and Michael. Michael is married, but he and Alice has an ongoing relationship that she has been trying to end, we even see her attend a support group for help. In the first portion of the movie, there are a few creepy scenes as we meet Shelly, a burn victim with a horribly scarred face who becomes Alice’s cleaning lady. There’s definitely a Single White Female vibe at this point in the film. As you know, if you’ve ready my reviews before, I don’t like to spoil films and I started this site because I hate review sites that tell you everything that happens in the film. This is a movie where I think that lack of play-by-play is crucial to enjoying — if it’s possible to enjoy something this dark — the experience. Through a series of flashbacks, we learn the origin of Shelly’s burns and why she seems as meek and broken as she is. This also helps explain her disgust with Alice and Michael’s relationship and Michael’s persistence at continuing even though Alice is attempting to end things.

Looking at this review, I have really overused dark and creepy, but that seems appropriate. Knautz and Kendra gave us a film that makes us feel uncomfortable, it makes us feel like we need that shower I mentioned at the beginning. The reason that it accomplishes this so well isn’t the introduction of an unkillable killer or mystical beast, it makes us uncomfortable because every scene in the film is possible. When we turn on the news, we hear all about horrible atrocities and awful situations. We hear about abused children, immoral actions, and a society that is crumbling at our feet. That’s what makes this film all too scary. At one point, a woman sees Shelly’s burns and screams in fear. While this movie didn’t make me scream like a slasher, splatter, or supernatural flick may have, I feel like I’m screaming on the inside at the realism of the film. I feel like this movie shook me in the way that Halloween was supposed to (but didn’t). I feel like I’m going to have a hard time closing my eyes tonight because of the horror that exists all around us. I also feel like this movie is worth checking out… it’ll be available On Demand, Digital HD, and DVD tomorrow (June 4th, 2019). 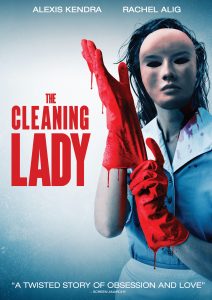 Movie description: On the surface, Alice (Alexis Kendra) seems like a woman who has it all: a gorgeous apartment, a booming career, a stunning physique, and a handsome boyfriend. The only problem is he’s married to someone else. Looking for a way to simplify her life, Alice hires Shelly (Rachel Alig) to clean her house. As Alice begins to confide in Shelly about her illicit affair, their friendship grows… and so does Shelly’s twisted obsession with her new employer. It soon becomes clear that Shelly has motives that reach further than a normal cleaning lady. Shelly wants to cleanse Alice’s entire life and will stop at nothing until she’s done.