I knew that I had to watch Satanic Panic as soon as I saw the cast list. Jerry O’Connell has been a favourite of mine ever since I saw him in Stand be Me and My Secret Identity (I’m still waiting for a DVD release of this series). The opportunity to see him alongside his wife, Rebecca Romijn, was too great to pass up. Additionally, I’m a huge fan of the horror comedy genre… it might just be the greatest film genre in existence. This movie isn’t quite Tucker & Dale vs. Evil, which is the high point of horror comedy, but it’s still quite entertaining and rather enjoyable.

The film, written by Ted Geoghegan and author Grady Hendrix and directed by Chelsea Stardust, is absolutely worth the investment. It stars Hayley Griffith, who is phenomenal in her film debut, as Sam, a pizza delivery girl just looking to make some money. When she delivers pizza to a upscale neighbourhood and isn’t tipped, she pushes back, forcing her way into the home to demand a tip. She expects to fight for her tip, but instead finds herself fighting for her life as she walks in on a Satanic cult looking to sacrifice a virgin.

The two things that immediately stood out to me were the music and the final cut of the film. The score was written by Wolfmen of Mars and, after hearing them, I’m going to have to check out some of their songs. People often talk about Halloween and John Carpenter’s score for that film. I’ve never understood the fandom surrounding that score, but after hearing the score for this film, I understand the fandom better, I’m impressed beyond belief at how well put together the music was. Halloween has nothing on the soundtrack for this film. As I said, the cut of the film was amazing, which is no small feat when you’re looking to properly cross horror with comedy. The movie needs to be just the right amount of creepy with properly placed humour. Part of that is going to be the director and cast, but the film also has to be edited well. My wife and I have definitely watched a few films where we’ve thought, ‘That was awesome, but it was so horribly put together that I never want to see it again.” This wasn’t one of those films. Everything flowed beautifully and the scenes were nearly perfect. There is an orgy at the end of the film that jumped around a little faster than I would have liked, but I understand why it was done that way and, other than that, I thought the film was visually appealing.

I think that’s the most important thing about this film, it was appealing. From the relationship between Sam and Judi (Ruby Modine) to the almost cameo-like appearance by Jerry O’Connell, the film is so much more than just another horror movie. It’s more than just a horror comedy even. While it may not stand atop the pedestal for horror comedy, it’s definitely placing near the front of the pack. It’s also a very nuanced and layered film. Sometimes you’re on the edge of your seat and it definitely left me feeling jumpy well after it was over. Other times, you find yourself laughing, sometimes rightly so and other times you feel dirty that you laughed but the scene was just so well put together that you had to. A great example of this is Sam talking to Mr. Rabbit. I don’t want to spoil anything, but you’ll understand when you see the scene. It’s creepy and amusing and 100% worthy of a chuckle. The film is also touching with moments that are incredibly tender, even though you find yourself in the middle of a disgusting horror scene. This is where Hayley and Ruby really shine, they bring a level of tenderness to the film, a glimpse of humanity that you don’t often see in this film genre.

One thing that I didn’t notice during the film, although I’m sure my wife would have if she’d watched it with me, were the nods to The Wizard of Oz, but reading the director’s comments and thinking back, I thought it was interesting. This is what she had to say:

I also noticed how many parallels the script had with one of my favorite films, THE WIZARD OF OZ. Our lead character, Sam, is essentially our Dorothy Gale, swept away to another world, a world she’s never seen before. She meets her Scarecrow, Judi Ross, who helps guide her through this world. She encounters the Wicked Witch of the West in Danica Ross and all she wants to do is find away home, which she does and is forever changed. You’ll see several nods to WIZARD OF OZ throughout SATANIC PANIC, including Sam’s red converse shoes, the modern ruby slippers.

When you watch this film, I think it’s something worth watching for this. I always try to leave any commentary on the film until after I’ve seen it, but this is one piece of information that I wish I’d had before hand. I may even watch the film again just to catch the references.

Finally, I think I need to wrap up this review with a huge shout out to the director Chelsea Stardust. It’s clear that she put a lot of love and care into this film. When you watch it, you’re not only entertained, but you can tell that the people working on it were filled with passion. I may have gone into this film because I’m a Jerry O’Connell fan, but I came out excited to see more films starring Hayley Griffith and directed by Chelsea Stardust.

Satanic Panic is in theatre, on demand and digital on Friday, September 6. 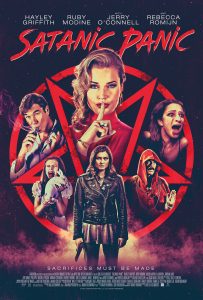 Movie description: Sam’s first day as a pizza delivery driver is not going according to plan. At the end of a long day and not enough tips, her last delivery turns out to be for a group of Satanists looking for someone to sacrifice. Now in a fight for her life, Sam must fend off witches, evil spells and demonic creatures, all while trying to keep her body – and soul – intact. Starring Hayley Griffith (“The Loudest Voice”), Ruby Modine (HAPPY DEATH DAY franchise), Jerry O’Connell (“Billions”) and Rebecca Romijn (X-MEN franchise), Satanic Panic is “an absolutely entertaining horror film that will satisfy any viewer’s need for monsters, mayhem and…jokes” (Robert Saucedo, Birth.Movies.Death).