Ayer has been associated with so many films that I’ve enjoyed – The Fast and the Furious, Training Day, S.W.A.T., End of Watch, Fury, and Bright. He also directed a couple episodes of the prematurely cancelled Deputy. LaBeouf is a talented actor that’s had so many amazing roles that it’s hard to keep track of them all. So, I immediately knew that I had to watch The Tax Collector. It seemed like a tired and over done concept – gangs in LA, but it was Ayer’s director’s statement that really drew me in.

It’s a world I know well. I went to high school in South LA and spent a lot of time on its streets. I’ve seen the good, the close-knit families, the struggle to make it in LA. And I have seen the violence. I’ve seen the loss. The holes that are torn through families when a loved one is killed, or for that matter when a loved one is incarcerated. I’ve witnessed the systemic issues. For me, the film is an attempt to answer the questions – what happens when the boxes of our lives get disrupted? How do we deal with the general forces that stalk our families? What are the limits of family and friendship? How hard will you fight to protect your world? And what are the lessons when you come out on the other side.

I’ve never been to South LA, but the film felt honest and real. It was just gritty enough that I felt that there was honesty in it and I can understand why I felt that way after researching members of the cast. David Ayer grew up in the neighbourhoods where they filmed. Bobby Soto is from South LA and Shia LeBeouf is from Echo Park. Add to that the inclusion of rapper Conejo, who is from the neighbourhood where Ayer grew up and who hid in Mexico for 14 years before being extradited to the US on murder charges (that were ultimately dropped) as well as activist Cle ‘Bone’ Sloan, a former member of the Athens Park Bloods who has worked on multiple films as a gang advisor and you can easily see why the movie felt honest.

Normally, I would want to talk about LaBeouf, who is an acting powerhouse, but he was overshadowed in this film by so many great actors. That’s not to say that his character, Creeper, isn’t interesting, but I’d rather let Ayer, who based the character, in part, on his own experiences, talk a bit more about Creeper.

Basically, every neighborhood in South-Central and East L.A. has a “white guy,” and that’s what so great about Mexican-American culture — if you show up for dinner long enough, they’ll eventually adopt you and suddenly you’re part of the family! It happened with me, and with that’s the case with Creeper. A lot of the character’s intensity comes from — and I can speak to this from experience — when you’re the only white kid in the hood, you really wish you weren’t white. A kind of self-loathing can develop; you feel lesser. And often you struggle to be accepted.

One of those great actors that overshadowed LaBeouf was Bobby Soto, who I encountered earlier this year in The Quarry. I felt like Soto did a great job of carrying the weight of two worlds. On one hand, you have a criminal underworld, where his character, David, is a ‘tax collector’ – making sure everyone pays into the protection racket his family runs – where he ventures out into the world every day with Creeper watching his back. In this world, David was in control and respected – minimizing retaliations, ensuring people were taken care of, and helping cover when payments came up short – you might even call him a criminal with a heart. Outside of the criminal underworld, David is a family man. A loving husband and father who takes care of his family and struggles to balance these two worlds. I think that Soto has a great career ahead of himself. I particularly enjoyed his action scenes. I could easily see him filling the shoes of Steven Seagal in a remake of Under Siege or  Jean-Claude van Damme in Hard Target (and yes… I would love to see remakes of both of these movies).

Soto finds himself surrounded by a plethora of talented actors that comprise his family, friends, and coworkers. George Lopez plays David’s uncle in a role that I would not have expected to see him in, but that he played brilliantly. My wife, who left during this film because it was “too gruesome” instantly recognized him and was equally surprised to see him in a serious role. Additionally, you had Lana Parrilla (Once Upon a Time) as David’s sister and Chelsea Rendon as his cousin. Both women had small but memorable roles. Finally, you had Cinthya Carmona as David’s wife. I only recognized Carmona from her role in Deputy (I’m going to take this opportunity to once again lament about its cancellation), but we do have Netflix’s Greenhouse Academy on our watch list, and I’m now looking forward to it more after seeing her performance in this movie. I really enjoyed the moments when Soto and Carmona were alone together on screen, playing off each other.

A lot of films can be called out for romanticizing gang life. This film is not one of those. It shows us friendship and brotherhood. It shows us family and love. It also, however, shows us that actions have consequences. It shows us the pain that the life can bring, the sorrow that can be experienced, and the regret that you might live with. I think that this movie is a lot deeper than people will give it credit for.  I think that Ayer summed that up best.

Having lived in the neighborhood, and understanding the dynamics, I wanted to have a message of black and brown unity in the film, which is a good message. At the end of the day, it seems counter-intuitive, but people who are involved in the criminal world do have values. South L.A. has a lot of family-oriented people in it — they have families, they love the people in their lives, they have kids and moms, and everybody has a brother, an uncle, a dad, or a cousin who’s incarcerated. It’s so easy to get wrapped up in the incredibly high incarceration rate, but that doesn’t mean people there are bad. Hollywood often shows these people as one-sided or as cartoons, but these are real people living real lives.

There’s a lot more that could be said about this film, but at the end of the day… I think all I need to say is that I recommend watching this. This isn’t a stream it when you’re bored film, I actually think this is worth the rental price.

The Tax Collector is available in theaters, on demand and digital on August 7. 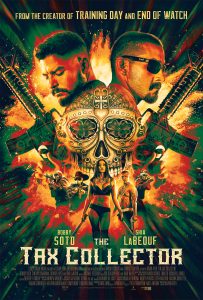 Movie description: David (Bobby Soto) and Creeper (Shia LaBeouf), are “tax collectors” for the crime lord Wizard, collecting his cut from the profits of local gangs’ illicit dealings. But when Wizard’s old rival returns to Los Angeles from Mexico, the business is upended, and David finds himself desperate to protect what matters more to him than anything else: his family.