I’ve slowly been coming around to the horror genre, but I’ve never been a huge horror fan. A turning point for me recently was sitting down to watch It (1990) followed by a trip to the theatre to see It (2017). I’ve seen the bulk of the classic horror movies from Psycho and The Little Shop of Horrors from the 1960s to Friday the 13th, A Nightmare on Elm Street, and Child’s Play of the 1980s. I’ve also seen my fair share of horror movies from my teen years and early 20s – Scream, The Blair Witch Project, The Ring, The Grudge, Final Destination, Jeepers Creepers, and more. I just didn’t go out of my way to watch horror movies, mostly because I’m not a fan of the supernatural horror movies that seem to rule the day. I do enjoy comedic horror and a good slasher flick from time to time. Given the time of year and the fact that I’ve never seen Halloween, it seemed like a good time to sit down and finally watch it. My wife and I grabbed the movie on iTunes and settled in for a good scare – after all, it has made numerous scariest film of all time lists.

Unfortunately, I found myself very disappointed. I wasn’t scared in the least. My wife commented that the movie was just “irritating” because of the stupid decisions the characters constantly made (yes, we’re aware of the tropes). I’m sure that this will win me a lot of hatred, but the movie’s pacing was incredibly slow with limited scenes of intensity and, even then, the intensity was more comparable to the “will they, won’t they” of a romantic comedy than the unexpected scares of a horror movie. I suppose an argument could be made that the film wasn’t made for a modern audience and that seeing all the movie franchises that were spawned from this film would have dulled me to the original, but I was expecting more. The film was scored beautifully, but honestly the music could have been lowered an octave and still been effective. At times, I was more concerned with the pain in my ears from the high pitched music than I was the activity on the screen. The cinematography on the other hand was not great. It felt like the movie was torn between being shot as a film and shot as found footage with awkward close ups and angled shots that simply distracted me from the experience. There were also the long, delayed shots of people just walking that felt like they went on much longer than they had to. Watching the film’s stars walk until they clear the shot was not needed, they definitely could have cut the scene before they – very slowly – walked out of it.

Another weak point (and there were plenty) was the acting. There were times when it was hard to believe that Jamie Lee Curtis went on to have a successful career after appearing in this film. The poor dialogue didn’t give her a lot to work with, but her scenes weren’t great. One scene in particular, her screaming in the closet, was especially painful – it drove my wife and I into a fit of giggles, finding it hard to believe that anyone would find the scene believable. Combine this with the fact that in the 1970’s people didn’t just not lock their doors, they also didn’t close them, and you’ve got a recipe for the unbelievable. Every door, in nearly every scene, was simply left open as people entered the house and walked around. Another amazingly humorous scene was when the residents of a house hear a screaming girl begging for help and they simply turn off the lights and ignore her, who does that?

I really wanted to like this film, I’m eager to see the 2018 sequel and, for years, I’ve known the story but never watched it play out. I was excited when my wife agreed to watch it – she despises horror films – and hopeful that this would interest her in the genre, given all of the good things I had heard. Instead, it felt like we were watching a horror satire – a parody of the slasher genre that I know and love. We laughed almost the entire way through and the scenes that were supposed to be frightening just made us laugh harder. The only time either of us were shocked, was when they revealed in the opening scene that Michael was a child when he killed his sister, my wife was unaware of that story element. The only scene that we found interesting, was when Laurie (Jamie Lee Curtis) stumbles across her friend Annie’s corpse laid out on the bed with Michael’s sister’s tombstone.

I feel that if we had watched this movie years ago, it would have been a different story. Perhaps, watching it in the middle of the night would have even been enough, but given when we did watch it, it struck me as more comedic than anything. The story itself is interesting and there were plenty of laughs, but the dialogue, cinematography, and weak acting combined with the lack of anything actually scary prevent me from giving this a higher rating. 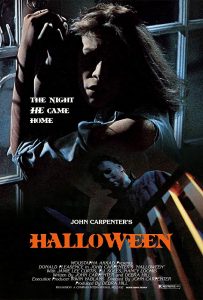 Movie description: In 1978, 15 years after he murdered his sister, Michael Myers escapes from the sanitarium where he was held and returns to his hometown of Haddonfield. He proceeds to kill a number of teenagers in the area.