As soon as I saw the trailer for The Opening Act, I was excited to see it. It was filled with a brilliant cast of comedians, it starred Jimmy O. Yang, who killed it in his Good Deal special, and it was insight into something that I’ve always wanted to do. I have such a strong desire to be a stand-up comedian, that one time, on my birthday, I drunkenly asked if I could get up on stage at Yuk Yuk’s. The film, written and directed by comedian Steve Byrne, is written to show what a comedian could encounter when they first start their journey.

I wanted to show what a comedian might endure over the course of their first weekend on the road: The romanticism, blind optimism and tempting the notion of “nothing good happens after midnight” when hanging with the feature act. The “inside baseball” and responsibilities comedians have like morning radio, hecklers and the emotional highs and lows that will stay with a comic like permanent marker on your face. The isolation, professionalism and wisdom a national touring headliner brings to a young performer’s first experience as an invaluable rite of passage.

The film follow’s Will Chu (Jimmy O. Yang), an up-and-coming stand-up comedian looking for his big break. We learn that Will is stuck in a job he hates and that he only gets time on stage when he brings paying customers to open mic night. When an opportunity presents itself for Will to emcee at The Improv, he quits his job and hits the road in pursuit of a breakthrough. The film follows the ups and downs of the weekend with a lot of humour, but also a lot of insight and heart. Will is opening for Chris (Alex Moffat) and Billy G (Cedric “The Entertainer”). The antics of Chris and the advice of Billy G appear to give Will a view of both ends of the spectrum. As an aside, I have to say that when I first saw Cedric “The Entertainer” years ago, I was convinced it was just Martin Lawrence in a fat suit.

The list of comedians that lent themselves to this film is impressive and telling of the faith they had in the script. From Tom Segura as a cop to Bill Burr as Will’s boss and Ken Jeong as Will’s friend to Russell Peters as a radio host, the film had everyone. The scene at the radio station was one of my favourites in the film and a very critical part of the movie. One of the stand-out performances for me, however, was Neal Brennan. I missed seeing his 3 Mics show at JFL42 in Toronto a few years ago and I’ve regretted it, seeing him as Chip in the film just made me regret it even more. The special is now available on Netflix (and has been for a few years), so I need to find the time to watch it there. You should do the same if you want to see more of Neal Brennan after encountering Chip.

While this movie makes you laugh, and it would be hard not to with so many talented comedians, it also tells a story. A story about failure and perseverance. It’s a story of getting knocked down so hard your descendants will feel it for generations, but getting back up and back into the fight. Sure, Yang is a great actor and a stand-out stand-up, which makes him ideal for this role, but even more so, he’s just so likeable and his smile is infectious. It’s impossible to see him smile and not smile yourself. I think that’s one of the reasons the movie works so well, he was literally the perfect candidate for the role of Will Chu.

The ups and downs of this film bring the viewer on a wild ride and it is a ton of fun. At times, you’ll be like that’s crazy but it’s so unrealistic… it turns out it isn’t. Which is why you should see this as soon as it is available. It’s also just a brilliant comedy that deserves to be seen.

And yes, once on the road, as painful as it was to revisit these memories, everything that happened to our lead character, happened to me. This is a love letter to my profession, to my fellow comics/club owners and to anyone determined to give their dream a chance.

The Opening Act will be available in theatres, on digital and on demand on October 16. 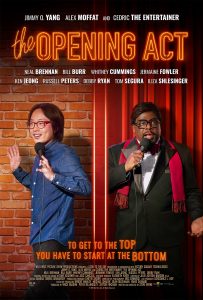 Movie description: Will Chu is stuck in a thankless job while trying to pursue his true passion in life, becoming a stand-up comedian. When he gets the opportunity he’s been waiting for, the emcee slot on the road opening for his hero Billy G., the realities of life on the stage come crashing in. Between relentless hecklers, drunk comedy groupies and hard-to-impress morning radio DJs, things get off to a rough start. Even if he can learn from his idols and overcome the challenges, he’ll have to prove he has what it takes to make his dream a reality.

Last year, Netflix hit a Christmas home run by releasing movies with two of my favourite CW stars – The 100‘s Eliza Taylor in Christmas Inheritance and iZombie‘s Rose McIver in A Christmas Prince. So […]