Have you ever finished a movie and said, “Yep… that was a movie.” I feel like that could be the end of this review. The film was not very good, it felt like the writer/director, David Perrault, was attempting to make a highbrow art film that merges the classic western and way too much teen angst. That was all I could think about the entire way through… the film had two competing themes and they could have worked out if one of them was toned down and some different directions were taken. Instead, the film felt forced, uncomfortable, and less than enjoyable.

The film takes place during the American Civil War and centres on a French family living in Missouri. The patriarch of the family, Edmond (Bruno Todeschini) imports perfume for the wealthy, but since the onset of the war, he has had to work with smugglers to get his product. He is helped in this business by Monsieur de Lisle (Grégoire Colin) and his muscle, Victor (Kevin Janssens). de Lisle is to be wed to Edmond’s eldest daughter, Abigaëlle (Maryne Bertieaux). The family is rounded out by matriarch, Madeleine (Constance Dollé), and two more daughters, Justine (Déborah François) and Esther (Alice Issaz). Living with them is Layla (Armelle Abibou), an emancipated slave in the family’s employ.

In the opening scenes of the film, de Lisle is killed and Victor visits Edmond to inform him of this. The background of this is the Civil War and the danger it represents. While Edmond dismisses the risks, the family attends a party, where soldiers show up requesting a place to stay. The soldiers end up abusing the guests and firing off their guns, killing the hostess. At this point, Edmond realizes the dangers and hires Victor to get his family safely from Missouri to New York. While the film plays out like a western, the dialogue is non-stop teen angst. The sisters do sibling things, they bicker, they find romance, they turn little problems into bigger issues. However, Madeleine brings most of the angst, so maybe it isn’t so much teen angst as just angst. Madeleine doesn’t not hide her hatred for Layla, who she suspects of having an affair with her husband. I can’t think of a time in the film where this was proven, but the reactions of the cast seem to make me think it is true.

The film had a few good things going for it that are worth calling attention to.

I did appreciate that when French was spoken, there was never a sense of urgency. So, while I had to rely on the subtitles, I was able to enjoy must of the film based on my high school French classes. I’m sure some people will enjoy more than that, but it wasn’t a movie for me and I can’t think of anyone I know that I could safely recommend this film to and they would enjoy it. They needed to find a lane and stick to it, but unfortunately this thing will take you on a wild ride that veers across an eight lane highway. 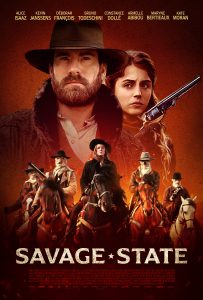 Movie description: The American Civil War breaks out... A family of French colonists, settled in Missouri, decides to go back to France. Edmond, Madeleine, and their three daughters have to cross the whole country to reach New-York. They are led by the mysterious and dangerous mercenary, Victor.