The film is inspired by the true life of Sister Ping, I was fascinated by the woman behind the mass migration of the Fujianese community to America. Sadly I never got the opportunity to meet with Sister Ping before her passing, but I met with law enforcement, former and current underworld members, and the people of NYC’s Chinatown in researching for the project.

As I further developed the story, I realized that I didn’t want this to be my personal interpretation of Sister Ping’s life. My Snakehead was going to be something new and modern. The character of “Sister Tse” is born out of historical prostitution on Kinmen Island. During the Cold War, state sponsored prostitutes from Taiwan were sent to Kinmen Island for the military. It is in this era that “Sister Tse” is born and sold. As a person without roots, survival is all she knows. This story is an homage to all those that are born out of those unfortunate circumstances, but have the fighting spirit to keep pushing for a better life.

Snakehead is an interesting film, but I found writer/director Leong’s words above to be even more interesting. I ended up reading the Wikipedia article on Sister Ping and it was quite the interesting read. It makes the movie significantly more interesting, even though the film was already a good watch on its own.

The film follows Sister Tse (Shuya Chang) who uses a snakehead to get to America and finds herself working off her debt. She ends up catching the attention of the gang’s head, Dai Mah (Jade Wu) and quickly rises in their ranks. While Sister Tse has her own mission and reasons for coming to America, she works for Dai Mah to pay off her debts, $57,000 that she owes as a fee for smuggling her into the US. This is the second reason I found the film interesting – we often see movies about coyotes smuggling people across the Mexico-United States border, I’ve never actually heard the term snakehead before. It was interesting to watch a film that presented a different aspect of human trafficking than the version we’re typically presented with.

I also found the casting to be relatively interesting. Jade Wu was instantly recognizable from Luke Cage and was the primary reason I wanted to see the film, but I somehow overlooked that Sung Kang (Han from the Fast & Furious franchise) was also in the film. I’ve always enjoyed the Han character, but I didn’t recognize him in the film… it wasn’t until I saw the name afterward while reading the credits that I realized who the actor was. I suppose that is a huge compliment to Kang that he is able to transition so completely that he became unrecognizable. I did not, however, recognize the films lead, Shuya Chang, even after looking at IMDB. This is a shame because she was absolutely brilliant in the role and I would love to see more films that feature her.

Snakehead is a story of resilience and survival. No one knows this better than the Asian woman. Mothers, sisters, and grandmothers are the heart and foundation of all Asian communities. I wanted to portray this presence and power in a criminal underworld that hasn’t been seen in film.

I really appreciated this quote from writer/director Leong. I think that both Wu and Chang embodied this description. They were both pillars of strength in the film and survival was key to both of their stories. Specifically with Chang, this made the movie very compelling. It was hard to get distracted with anything else while watching her on screen, she absolutely captivated and held focus, stealing any scene she was in, even if she was just sitting silently at a table.

My only complaint about the film is the inconsistent use of subtitles. As a film focused on the Chinese community, taking place in NYC’s Chinatown, I would expect the film to frequently and seamlessly slip between languages and it does. This isn’t a problem, but when a non-English language is spoken, I expect subtitles. There were entire portions of dialogue that were not subtitled. I know that this is sometimes an artistic choice to keep the viewer in the dark and I’m not sure if that was the choice here, but I did not appreciate it. When I’m watching a film, I want to understand everything that is said and would prefer if the film was consistently subtitled. That, however, is my only complaint and probably the only thing that held me back from calling this a 4-star film.

If you get the chance to check out Snakehead, which was released in theatres, on digital, and on demand on October 29. 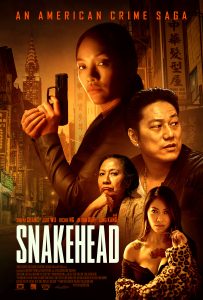 Movie description: Sister Tse comes to New York through a Snakehead, a human smuggler. She gains favor with the matriarch of the family of crime and she rises the ranks quickly. Soon Tse must reconcile her success with her real reason for coming to America.