This movie was an absolute gem that caught me completely by surprise. A movie about a group of singing fishermen from Port Isaac, Cornwall… not exactly a catchy pitch for a movie. That said, I was hooked in the first few moments and found myself on the edge of my seat for quite a bit of the movie because I was just so fascinated by it. The film is “based on a true story” and I did read that the actual band consulted on the film (and had cameos), but from what I’ve read, there’s definitely some movie magic added to the film. I find myself wondering the same thing I always do when I see a movie based on a true story, “What is true and what was added?” Regardless of that, it was a great movie and worth watching.

The film follows four friends (and colleagues) from a music management firm who head to Port Isaac, Cornwall for a bachelor party and, while there, one of the group, Danny (Daniel Mays) is convinced by his boss that he MUST sign a local group of singing fishermen, Fisherman’s Friends. The film then follows Danny as he convinces the group (which isn’t an easy task) to let him manage them and record a demo.

The film is filled with toe-tapping shanties and has a wonderful soundtrack, but there are two standout musical moments. The first is when the group sings at the church (St. Kew Parish where the actual band recorded an album). The second is when Rowan (Sam Swainsbury) performs a solo. I would definitely buy an album from this man.

The film itself has two primary stories. The first is that of the band, led by James Purefoy playing Jim and he is absolutely brilliant. When I looked at his resume, I was surprised that I did not recognize him, he has quite the impressive history and is an incredibly talented actor. The second story involves Danny and Jim’s daughter, Alwyn (Tuppence Middleton), and is a story pulled straight from romantic comedies. That, of course, was fine with me and I loved both stories.

As I said, this film caught me by surprise and it is brilliant. There’s obvious comedy and subtle comedy. There’s moments where I cried and moments where I laughed so hard it hurt. The music is touching and familiar (even though most of it wasn’t familiar to me). The cast is amazing and I believed the members of the band were lifelong friends. I often say that films don’t invest enough time in character development and they rush the story to the detriment of the characters. This film is not guilty of that… the characters are real and relatable. I have time to fall in love with the characters, to care about them, to invest in them while still delivering a great story.

A shout-out to the setting of the film as well. Port Isaac, Cornwall is now on my list of places I’d love to someday visit. In fact, the first thing I said when I saw the town was, “I wish I could live there.” Talk about a beautiful, magical place.

Fisherman’s Friends is available On Demand and Digital July 24, 2020. 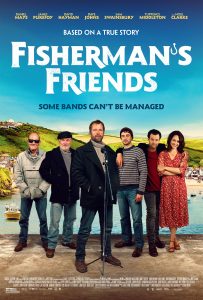 Movie description: Inspired by a true story, Fisherman’s Friends tells the heartwarming tale of a Cornish all-male group that go from singing sea shanties to shooting up the charts. Taken by their performances, music manager Danny takes a punt on this amateur outfit, made up of hardy fishermen and lifeboat volunteers. As he vows to turn this crew into the world’s oldest buoy band, he finds more than a good record deal. When you open your heart, life, love and friendship can play the most harmonious tune…