If you’re a frequent reader of my reviews, you’ll know that I have a complex relationship with horror movies. For most of my life, I hated them – seeing movies like The Ring and The Grudge in theatres were some of the scariest moments of my life. Lately, however, I’ve come to really enjoy a good horror film, particularly slashers. With my newfound love of macabre theatre, I even reviewed the original Halloween, which I was disappointed to say wasn’t very scary. Suprnatural horror still creeps me out, but I’m trying to watch more of it and Head Count definitely falls into that category. I had a knot in my stomach and jumped at every noise for several hours after watching this film – a day later and I still have goose bumps writing about it.

This was director Elle Callahan’s first feature film and she’s credited with the story as well. I’d say that this is an amazing showing out of the gate. If this is the type of film that can be expected from her, I’d say that she’s going to kick ass and take names in the horror world. I think that cons like HORROR-RAMA should be jumping to try and secure her as a guest before she becomes too well known. I was rather interested to read Callahan’s background. She stared out as a sound designer and worked in post production on a number of big name films including Avengers: Age of Ultron, Ant-Man, Krampus, and Wonder Woman. The sound designer part really stands out when you consider how effective the music was in this film. I feel like this movie did for me musically what everybody said Halloween should have done. Callahan is already working on her next film and I’m excited to check it out.

The cast of this film was, essentially, a group of unknowns. I thought I recognized one cast member, but when I looked them up, I was mistaken. I’m always nervous was a film has no names that I recognize, but I was pleasantly surprised. I think there were one or two casting missteps, although it may have also been the way the character was written, but overall the cast did a great job. I felt the tensions and the fear of the unknown; I believed them and felt like I was there with them.

Since this is a review, we should probably talk about the film. Evan (Isaac Jay) is leaving his dorm over the holidays to spend a few days with his brother Peyton (Cooper Rowe) and it’s immediately clear that he doesn’t want to spend time with him. While out hiking in the desert, they come across a group of people including Zoe (Ashleigh Morghan), with whom Evan has an instant connection. They refer to them as a group of teenagers, but I feel like 20-somethings would have been a more appropriate description. Evan ultimately ditches his brother to spend the weekend with Zoe and heads back to the place the group has rented for the night. The film does a great job of not making things too boring as far as the setting goes – everything takes place in either the rental home or the desert, but it feels like a much more immense world than we actually see.

While at the rental home, the group tells ghost stories and, when Evan’s turn comes, he looks up a story on the internet about a mythical creature known as the HISJI. After Evan recites the verse, creepy things start to happen around the house. Over the course of the weekend, the film slowly builds, perhaps a little too slowly at times, but I think that’s what makes it so scary, it lets you get comfortable. At first, it is little things, they seem odd and out of place, but you’re not quite sure if you even saw something and eventually things start to become more obviously askew and the scariness starts to overwhelm. It all culminates in the final few minutes of the film and, finally, you get a conclusion that clearly leaves the door open to continue this story. I want to reiterate a thought from above, Callahan does an amazing job with the music. Without sharing too much and ruining the effect, she does an amazing job of using music to heighten the scare and keep you on edge. The more I think about the film, I think that a lot of the scariness of the film comes from the sound work. For that reason, I recommend watching this with the volume turned up a little higher than usual.

At the end of the day, I think this was really well done and will stand for a while as a solid B horror film. I wouldn’t be surprised to see more about the HISJI and a growing universe. Honestly, I’d love to see a series of horror comics involving the character, I think they’d be a lot of fun to read. If you’re a fan of horror films, you definitely want to check this out. 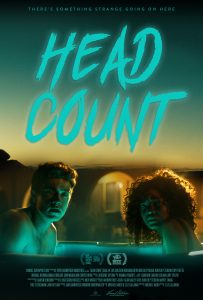 Movie description: Newcomer Evan joins a group of teens on a getaway in Joshua Tree. While exchanging ghost stories around the campfire, Evan reads aloud a mysterious chant from an internet site. From that moment, someone--or something--is among them. As unsettling, inexplicable events become more frequent, Evan realizes this summoned shape-shifting creature is targeting them to fulfill a deadly ritual.