I wanted to make a movie that captured the feeling of loss, accepting there is no control, and learning to become more present. So I came up with an idea about friendship and the ones closest to us, about 5 year plans and how they never work out how we expect, and about relinquishing power. But how would I express that story? I wanted to make something that felt extremely true to both sides of my personality, optimism and hope versus anxiety and perfectionism… and what better way to explore that than through an alien encounter?! I’ve always found truth and understanding by way of comedy and absurdity.

I wasn’t sure what I was getting into when I sat down to watch I’m Totally Fine. It was advertised as a comedy but the synopsis made me wonder just how emotional the film would end up being. All I know for sure was that I love comedies and I’m a huge fan of both Jillian Bell (she was fantastic in Godmothered) and Natalie Morales (she’s been great in a number of TV sitcoms that I’ve enjoyed and thought ended too soon). So, I sat down to watch the film, unsure of what to expect. After all, what sounds more interesting on a Sunday afternoon than a film about a woman dealing with her best friend’s death while hanging out with her best friend’s alien doppelganger.

Honestly, the opening of the film was a little too “artsy” for me. We’re dropped into a story that is in progress – Jillian Bell’s character, Vanessa, is crying in a car without a lot of details why. Then, we get a scene with weird lighting and odd cuts when Vanessa first encounters Natalie Morales’s alien Jen. The acting from Natalie Morales also threw me for a loop, it was so wooden and stiff that it felt awkward. Add a weird scene about it being illegal to cancel a party less than 24 hours in advance and the first 15 minutes of the film were not what I was expecting and were a little off-putting. If you find yourself feeling the same way… just stick with it – I promise, it gets better.

After the awkward setup of the film, we get a really heartwarming tale about closure and dealing with loss. It seems to me that more and more of the movies I see these days deal with these themes. I’m not sure if I’m drawn to them or they are becoming more popular. Alternatively, maybe when I was younger they didn’t appeal to me and I didn’t pay attention. Have these films always existed? It is interesting how powerfully our lives and lived experiences dictate the lens through which we see film. I’m not talking about movies like The Fast and The Furious franchise, but actual films like Tammy’s Always Dying, Red Rover, and Moments in Spacetime. I don’t think I would have appreciated them the same way when I was younger. Now, I can add I’m Totally Fine to that list. I was glad to see this echoed in Dermer’s director’s statement.

When I was a young boy, I knew there was a film I was meant to make… and I’m Totally Fine wasn’t that film. I mean, I was a kid, I knew nothing! I wanted to make a film about astronauts and robots fighting in space (as I’m typing this, that actually sounds like a decent blockbuster). But after many years and a variety of life experiences, including dealing with loss and setbacks (both personally and professionally) and coming to terms with my own anxieties, the idea for I’m Totally Fine was born.

I have to admit that astronauts and robots fighting in space sounds like a fun movie, but I’m Totally Fine was a thought-provoking film that really makes us think about who will mourn us when we’re gone and how we’ll mourn those that leave before us. As Vanessa shares this time with Jen and gets a closer look into some of their past interactions, we learn how the truth and white lies are blurred and we see where that line is drawn. Alien Jen doesn’t get caught up on human emotions or understand lying to protect someone and shares things that Vanessa should never have known, lighting a path that would have otherwise remained dark. It was fun to go along with Vanessa on that ride and think about what those moments would look like if our closest friends were to encounter our emotion-less, alien doppelgangers.

While I didn’t actually cry, I could feel myself tearing up more than once. It is an emotional film and the delivery by both leads is excellent. Bell is every part of the grieving friend, struggling and in pain. Morales, on the other hand, is devoid of emotion and purely analytical as she gives us a performance that I feel is award worthy. Together, the differences between the two characters play off each other brilliantly and create a compelling story that ended up being a real joy to watch.

If not for the awkwardness of the films opening, this could have easily been a 4 or 4.5-star review. It was, however, an enjoyable film and I definitely recommend watching it if you get the chance.

I’m Totally Fine was released in theatres, on demand, and digital on November 4. 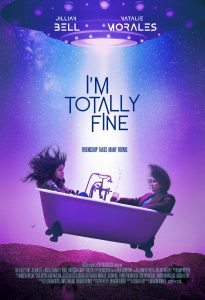 Movie description: Vanessa (Jillian Bell) embarks on a solo trip to clear her head after the death of her best friend Jennifer (Natalie Morales). But her self-care vacation takes a detour when she finds the recently departed Jennifer standing in her kitchen, claiming to be an extraterrestrial. Together they spend the next 48 hours partying and reminiscing on better days in a comedy that's out of this world.