Moments in Spacetime is a fantastic Canadian film that was on the cusp of greatness. It was well written, well shot, and well acted… it had everything it need for me to want to give it 4 or even 4.5 stars. Unfortunately, it fell short in the setup, I had to actually read to press kit to fully understand the background of the film. Some of it is revealed as the story progresses, but I felt like a better setup could have made the film pop from the get go.

In the opening scene, we’re introduced to Macie, a Thai woman raised by an adopted family in Canada. She has a sister who seems to be in high school and she works, at least briefly, at a long term care facility. Was this an after a school job? How close are she and her sister in age? They appear to be of a similar age. Her family, particularly  her mother, doesn’t treat her very well. There’s a lot of questions that would help setup the story that aren’t answered. I actually paused the movie and sought the film’s press kit, hoping it would answer my questions. It did just that… it laid out all the missing details.

Macie’s biological family was lost in a tsunami in Thailand when she was 12 and she was adopted by a family unable to have a child. Shortly after the adoption, Macie’s adoptive parents became pregnant and her younger sister was born. This all happened in 2004 and the film takes place in 2019, which would make Macie roughly 27 and her sister 15. It might also, as unfortunate as it may be, explain why her mother isn’t as attentive to her needs. It also explains why her parents are gently nudging her out of the house. While the mother’s treatment of Macie was awful before we knew this background, the parents desire to get rid of her makes more sense when you realize she’s 27 and has no direction in her life. If I had children, I wouldn’t want my 27 year old living at home either, adopted or not.

So, on one hand we have Macie (Patty Srisuwan), an aimless millennial refusing to grow up and behave like an adult and, on the other hand, we have Mason (John Rhys-Davies), Macie’s grandfather who has dementia and a fondness for beer. While Srisuwan shines when she’s alone on screen, particularly when she’s singing, Rhys-Davies steals every scene he is in. The delivery of his dialogue – both comedic and dramatic – is spot on. I’ve been a fan of his for many years and it is clear that he is still as talented as the first time I saw him on screen as Sallah in Indiana Jones and the Last Crusade.

Moments in Spacetime is a film about two things that are dear to me: Language and Identity. We can’t express one without the other. It is language that allows us to share our identity and create connections with other people. And yet, it is the inadequacies of language that lead to misunderstandings and prevent us from ever fully knowing another person. This film aims to identify the bubble of language that separates us… and pop it. Leaving just human characters trying to connect with moments in spacetime.

I think that this is a beautiful sentiment and feel that the movie did a great job of demonstrating it. It also does a great job of demonstrating the casual and overt racism that fills small town Canada. In some of the lines that are spoken, I could very clearly hear people I knew growing up, just as clearly as I could see their faces in the reactions of certain characters who interacted with Macie. I think that this focus may have distracted Cowden from writing a better character. Macie feels superficial… she feels like the spoiled, entitled millennials that you constantly hear about. While the synopsis for the film refers to Macie’s parents an unempathetic, there are times when it is hard to empathise with her. A 27 year old living at home painting hearts on her cheeks and taking photos with a polaroid-like sticker camera instead of looking for work isn’t the most empathetic person. Are there times when I do empathize with her? Definitely. There are moments that leave me feeling absolutely awful and completely gutted and there are moments where I’m disgusted by how selfish she is. One particular anger-inducing moment involves Macie dressing up like a circa 2005 Gwen Stefani backup dancer and going clubbing, leaving her dementia ridden grandfather alone. This makes it difficult to feel sorry for Macie, it feels like the shirking of responsibility that is so commonly associated with millennials.

To present these human characters in a unique and unbiased manner, the story is told from the perspective of a sentient being in the distant future. Known only as “The Mediator,” she can look back into the moments in time that define our characters’ lives, but not into their hearts or minds. Like the narrator, the audience can only speculate about these feelings. The film can be interchangeably “listened to” or “viewed.” Each character has their own unique lexicon, and the audience can judge characters by language rather than appearance. Ultimately, the experience I would like to communicate most is one of wonder for the ordinary moments that define our everyday lives.

This is more critical information that is never revealed. It’s this type of information that I often feel filmmakers forget we don’t know. I don’t want to be spoon feed, but I would have loved a bit more background. Cowden refers to this film as Inverted Science Fiction and I love that take. I feel like it could have been used to more solidly define an introduction that provides purely analytical data on Macie while introducing The Mediator.

In traditional Science Fiction, real-world writers imagine another world, future, or culture then mediate its fantastic elements for modern readers/audiences. These stories often focus on distant futures, alternate realities, or dystopian civilizations. Moments in Spacetime flips this model. It is a modern, real-world story told from the perspective of a sentient being from the future, and for a future audience.

Ultimately, I’m not sure where I stand on this film… I think it is conceptually brilliant and I think both leads, Srisuwan and Rhys-Davies did amazing jobs. I loved watching Macie and Mason’s relationship grow – the chemistry the actors shared seemed to be emitted from the television. It was very fitting and very appropriate. I also understand that Cowden was trying to convey Macie’s feelings of being an outsider and lost with some of her choices, but they ultimately left a sour taste in my mouth. I think that this is the first time in a while that I’ve walked away from a film torn. I honestly don’t know how I feel about Macie and her search for identity. Maybe that was Cowden’s goal. I am sitting here wondering if I’m being too hard on Macie, but then I come back to her partying while her grandfather is alone and the doubt washes away. Then I think that I’m not in that position so maybe I shouldn’t judge and I just keep going back and forth on the topic. I will say that it speaks volumes of Patty Srisuwan’s acting ability that I’m so torn over the character and so fascinated by her choices. I’d also like to try listening to the film instead of watching it, to see if that changes my take on any of the actions… I’ll put that on my list of things to do that next time I have some downtime.

Personally, I think everyone should watch this film. It is eye opening and thought provoking. I honestly may need to watch it two or three more times to fully understand it… actually I’ll still probably only partially understand it. I did enjoy myself the entire time and I can rarely say that about a film. It was a great movie and an easy investment of a couple of hours, there’s definitely no buyers remorse on time I spent watching it. I’ll leave you with a quote from Macie, Patty Srisuwan.

I am asking the audience to experience the life of an immigrant for two hours. If you feel uncomfortable, imagine doing this for a lifetime. By presenting these moments on film, we hope to start a more complex discussion on the issues of racism and immigration in North America.

After a limited theatre run, Moments in Spacetime is available on iTunes as well as Bell and Shaw Cable as of November 10. 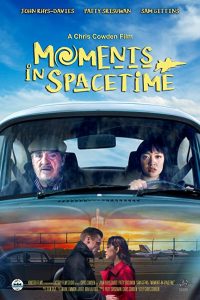 Movie description: A story of identity that brazenly confronts the parts of self, family, relationships, and society that threaten to break us and divide us—but those that can also bring us together.