One of my favourite things about starting this website has been the discovery of films that I never would have considered watching and I’ve definitely discovered a few gems. LETO was one of those gems. The film focuses on the Russian rock scene in the early 1980s, specifically Viktor Tsoi, Mike Naumeko, and Natalia Naumenko, Mike’s wife. There has been critical feedback regarding the film from those associated with the music scene at the time, including one of Viktor’s former bandmates, but the film is “based on the memories of Natalia Naumenko.” So while it’s tough to say what is factor or fiction, I know that sometimes those heavily involved in a movement don’t have the clearest views of themselves, so I’m taking the film as more fact than fiction.

As I’m unfamiliar with the 1980s Russian rock scene and the impact of artists like Tsoi and Naumeko (and their bands Kino and Zoopark), I reached out to a few friends that I thought might help me to better understand the individuals portrayed in the film. One Ukrainian friend said that Viktor Tsoi was as popular as Michael Jackson and that a friend of his once referred to Tsoi as the Kurt Cobain of Russia. He said that the songs were simple to play with catchy lyrics and that if you were camping with friends, alcohol, and a guitar, you had one of his songs. Another friend said he saw Tsoi live every time he came to his city, including three consecutive sold out shows. Even though I don’t understand the lyrics, I loved listening to the music, so I imagine how much more amazing it would be for those that understand the language.

The film introduces us to the music scene and the Leningrad Rock Club, Leningrad’s only legal rock venue at the time, which was overseen by the KGB. The opening scene is actually quite interesting as we see “hall monitors” preventing fans from waving signs and putting a stop to people who dance in their seats. Later in the film, we learn that all songs performed at the Leningrad Rock Club had to be approved based on the content of their lyrics. I can’t imagine what life was like for teens and 20-somethings in Russia at the time… punk played a pivotal role in my teen years and I can’t imagine the lyrics of Anti-Flag would have been very popular with Russian authorities.

At the same time that we’re learning about the rock movement in Russia, we see a love triangle play out as Viktor becomes a wedge in Mike and Natalia’s marriage. A lot of people would probably want to call Viktor the homewrecker in this case, but I’m not sure he’s to be blamed. Mike was a very odd individual and, if these are indeed the memories of Natalia, it is clear that she cared much more deeply for Viktor than she did for Mike, although given Mike’s behaviour, she can’t be blamed for that choice. The romance did not have the Hollywood love story ending that I would have liked, but real life seldom ends with those feel good moments we see in the movies.

There are two things worth mentioning about this film. The first is the musical choices. At times, this movie feels more like a musical and the music is such a driving force in the film that it reminds of me of Baby Driver in that regard. Without the musical choices that were made and without the music being melded so firmly into the film, the movie would have lost something. The film contains a mixture of original songs from both Mike and Viktor including Dryan, Leto, My Friends, Aluminievye ogurtsy, Derevo as well as well known songs like Psycho Killer, Broken Hearted Blues, Passenger, Perfect, Ashes to Ashes, and All the Young Dudes.

The other thing worth mentioning is the style choices made for a few of the scenes. There’s a character known as the Skeptic and he introduces scenes that are aren’t real – dream-like, “what if” type scenes. These scenes are quite amusing and really entertaining. It would be curious to see how these changes would have impacted history. The scenes include on screen animations and usually include one of the English songs mentioned above. At first, they might catch you off guard, but once you realize what is happening, they really add to the film.

As a heads-up, the film is shot in black and white, but occasionally adds hints of colour, especially when showing footage filmed within the film – many of the scenes have someone with a camcorder recording the scene and that footage is used within future scenes of the film. At first, I wasn’t sure about the black and white choice, but I found the film to be really enjoyable and the colour choices fit perfectly. It’s also subtitled, which may turn some people off, but if you can handle subtitles (or speak Russian), I really recommend checking out this film. It opened a very interesting door to a world that I had never experienced, but I already have Kino queued up in Spotify.

Finally, I just want to say that this movie made me smile. Whether it was the music, the scenes with the skeptic or simply the interpersonal relationships, I felt a lot of simple joy while watching this film. It’s hard to really qualify but it’s something quite special and definitely worth seeing. I imagine that it might have spoken to me in the same way that Viktor’s music spoke to his fans. 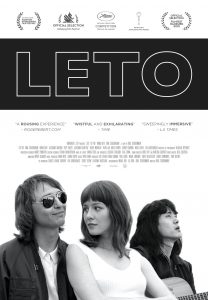 Movie description: Avant-garde Russian filmmaker Kirill Serebrennikov (The Student) returns to the bigscreen with a tribute to the early years of Russian rock. Leningrad, in the summer, early eighties. Smuggling LP’s by Lou Reed and David Bowie, the underground rock scene is boiling ahead of Perestroika. Mike and his beautiful wife Natasha meet with young Viktor Tsoï. Together with friends, they will change the trajectory of rock n’roll music in the Soviet Union.