I would like to preface this review with a simple statement, I cannot be unbiased. I was 11 years old when Jurassic Park was released and it’s the first movie that I remember seeing in theatres. In my eyes, this franchise can do no wrong. With a rock star cast, a good story, and one of the best franchises in the past 40 years, this movie was an easy win.

Before we fawn over the movie, let’s briefly call out two weak spots. The first issue was the casting for a few of the smaller roles, I didn’t fully buy Ted Levine and Rafe Spall in their roles. While Levine, a great actor, was passable, I don’t feel the role was a perfect fit, I would have preferred to see someone like Terry O’Quinn or Vinnie Jones in the role. Spall, an actor I would call forgettable for lack of a better term, I felt he was too generic to play the villain. The second issue was an overuse of the “frozen in place for a moment too long” move, it felt like it was the only dramatic tool in the toolbox at times, almost all of the risk was creating by having a person linger longer than they should. A lot of movies are guilty of this, but I really noticed it in Fallen Kingdom.

The breakdown of this movie was favourite components. While we’re getting caught up at the beginning, after the reintroduction of Dr. Ian Malcolm, we get a good bit of humour from Chris Pratt’s Owen. While I laughed a few times, one moment that made me smile was the moment of sincerity when Claire (Bryce Dallas Howard) says to Owen, “You’re a better man than you think you are.” Owen, attempting to brush it off, simply replies with “You should write fortune cookies.” It’s these little moments when a movie makes my lips curl and I feel an honest connection between the characters that I most enjoy movies. The humour that follows us to the return to Isla Nublar is critical as we quickly realize something isn’t up and our protagonists are thrown into the fire.

After Owen reunites with Blue (the raptor he raised from birth), we learn what is really happening and watch the harrowing events that take place on the island, not yet sure if Justice Smith’s Franklin is a red shirt or going to make it until the end (Smith does a great job of keeping up with Pratt in delivering the comic relief in this movie). The time on the island comes to a close with a scene that blew dust in my eyes and caused my allergies to flare up, a scene that has been all over the Internet as the Brachiosaurus brays  from the dock of the island, it is hauntingly beautiful moment.

At this point, we’re ready to jump into action mode and the movies pacing speeds up. While I’m not a fan of reviews that spoil the film, I would like to call attention to three amazing moments in the back half of the movie. If you would prefer not to have anything spoiled, simply avoid the hidden section below.

Spoiler
The first is an amazing moment when Owen and Claire are trapped and Claire gives an dramatic speech that starts with, “Do you remember the first time you saw a dinosaur?” As she speaks, the original Jurassic Park theme slowly plays over the scene, creating a spectacular movie moment. Follow this scene, we spend some time with  Stiggy, the Stygimoloch, in the second amazing moment that brings some much needed levity. The final is the touching moment when Isabella Sermon’s character Maisie steps up to act where the adults around her took pause. At that moment, I realized that some dust remained in my eyes.

At the end of the movie, after watching the credits, I was left with a burning question. Why was Guillermo del Toro thanked in the credits? Collider asked J.A. Bayona that very question and, if you were wondering, you check out their interview.

At the end of the day, Fallen Kingdom is unlikely to win an Oscar and it has definitely not fared well with fans and critics alike. It is, however, well worth your time and energy. If you were a child of the 80s and 90s like I was and remember seeing Jurassic Park in theatres, this moving is a touching and fitting continuation of the story. Take the time, pop some popcorn, and enjoy the adventure. 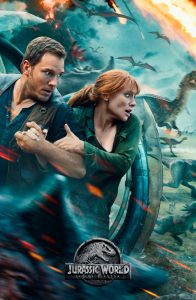 Movie description: As Isla Nublar faces an extinction-level event that could wipe out the dinosaurs left behind when Jurassic World concluded, an effort is made to save these magnificent creatures from a second extinction. For some of those involved, the mission is not as pure as it may seem and life as we know it is threatened.

Sometimes a movie just speaks to you. One of the first films to do that for me was A Walk to Remember. When it came out, I was 20, I was in college, and something was […]