I’m not really sure how to write this review. Red Rover is brilliant.

From the screenings we’ve had so far, time and time again, people are most surprised by the $50,000 budget, that the film feels like a “real movie” despite that limit. I will again say, it feels that way because the entire cast is hilarious and charming as hell.

A couple of things about this statement surprised me. The first is the “feels like a real movie” part. There is no question… this is a real movie. It has an amazing cast – Kristian Bruun and Cara Gee are amazing on screen together, a great director, and an amazing script. Clerks, one of my all-time favourite films was shot in 1993 with a budget of $25,575 USD. I’ve never heard anyone question if Clerks was a real film. I was, however, surprised to hear that this was shot with a $50,000 budget. It felt much more polished and put together than that. I was curious, so I thought it would be interesting to compare the budget of this film to the budget of Clerks. I realize that technology has evolved and it’s a very different world today, but I thought it was a fun thought exercise. That $25,575 USD would be $47,906.27 in 2018, when Red Rover was filmed. I assume that the $50,000 Red Rover budget was in CAD, so I then factored in the exchange rate. The film features the CNE, which started on August 17th, 2018 (also the lowest exchange rate day for the duration of The Ex), so I went with that exchange rate (0.7599). That means that the film was made for $37,995 USD. Comparatively, it cost less to make Red Rover than it did to make Clerks and this surprised me greatly, even when I consider the changes in technology in the more than two decades between the films.

Anyway, enough napkin math for my own amusement. I’ve been a huge Kristian Bruun (Damon) fan for a while. It may be the characters he plays, but he seems like the nicest, happiest guy on the planet. Someone that I would love to sit down, have a beer with, and chat with. Maybe he’ll see this and, in a post COVID-19 world, it’ll happen… then again it probably won’t, but I’ll still watch every movie he’s in because he sells every character he portrays. I was not familiar with Cara Gee (Phoebe) going into this movie, but she’s the perfect romcom pairing for Kristian. They had tons of chemistry on screen, she was perfect for the role. Phoebe is one of those characters that you fall in love with as the movie progresses and I’m not sure any actress could have pulled that off… there was something special about Cara’s performance that made it possible.

I think that the film is incredibly relatable, perhaps now more than ever before. It’s a movie about feeling lost and filled with despair, a film about searching for happiness. For Damon, those feelings come from a broken heart and a lost job. The fact that he was relegated to a basement apartment, a “dungeon” as Phoebe calls it, only adds to his quiet desperation. He’s looking for an escape, anything to latch onto, and that’s what Red Rover, a program to settle Mars, provides. I imagine a lot of people are feeling trapped, lost, and filled with despair in the world today. The reasons may be the same, they may be different… but the feelings are there. We’re all looking for our Phoebe… someone or something to push us toward accomplishing our goals. For Damon, that is joining the Red Rover program. I felt that the movie was gifted to us at just the right time.

There are two more, unrelated, points, I want to make about this film. The first is the amazing way that Damon’s time on the beach with a metal detector ties everything together and brings so much additional meaning to the story. It is definitely an A-Ha! moment when you see it all come together. The second is the humour of the film. Not just the chuckles that are synonymous with the romantic comedy. This goes so far beyond that. It is actually funny.

I loved this film. My wife and I watched it while celebrating our 12th wedding anniversary. 14 years ago, I had an interview with a company… a life-changing job opportunity and I wasn’t going to go through with it… but we were dating at the time and she pushed me to go to the interview, to follow through. In many ways, she was my Phoebe at that moment in my life. 14 years later and my entire career has been built on that interview. So, maybe I was just more sentimental than I normally am and that’s why I loved the movie. I don’t think that’s the case though… I think I loved the movie because Shane Belcourt and Duane Murray wrote the perfect romantic comedy, Shane then followed it forward to ensure that everything was perfectly directed, and Kristian Bruun and Cara Gee gave us the perfect romantic comedy pairing. It was perfectly Canadian and can be summed up with one word – Perfection.

Check out Red Rover available on digital and on demand now. 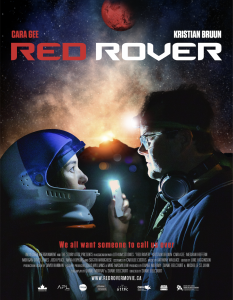 Movie description: Damon (Kristian Bruun) spends his waking hours searching for that elusive something. Whether it’s for deeper meaning, love, or just “treasure” on the beach with his metal detector, but to no avail. So when Damon meets an offbeat musician named Phoebe (Cara Gee) handing out flyers for a one-way trip to Mars, a bond quickly forms. She’s going to help him find that thing he is looking for by sending him 33.9 million miles away, even though what he needs might be right in front of him.