I was 11 years old when Mighty Morphin Power Rangers premiered and I was hooked… what 11 year old wasn’t? On top of the martial arts, the Zords, and the action, the series had the Pink Ranger, Kimberly Hart, played by actor Amy Jo Johnson. You could definitely say that 11 year old me was smitten. Years later, I encountered her again in Flashpoint, one of the best television series of the 21st century. Flash forward half a decade after that and I learned that she had written and directed her own film starring one of my favourite Flashpoint alums, Michael Cram. I was a huge fan of The Space Between and Johnson quickly went on my list of directors to watch. When I discovered Tammy’s Always Dying, I knew that I had to see it.

Shot not far from me in Hamilton, Ontario, the film couldn’t have had a better setting. I grew up in a steel town, smaller than Hamilton, but, from everything I’ve heard, not that dissimilar. My wife, before she knew the film was shot in Hamilton, even commented, “This feels like a steel town.” Everything about the setting was bleak and filled with despair, providing a level of realism that you seldom experience in film. Which is definitely worth mentioning. There are no glitzy sets or out of place shots in this film – it feels real. From Tammy’s house to Catherine’s struggles between herself and her mother, everything about the film feels completely real, like it could be the story of someone I went to high school with.

The story follows Tammy (Felicity Huffman), an alcoholic on welfare who tries to kill herself every month, climbing on a bridge and waiting for her daughter, Catherine (Anastasia Phillips), to save her. Catherine works hard and just tries to get by, but you can tell that the world has got her down, she looks defeated when we first meet her. When Tammy is diagnosed with cancer, Catherine moves in to care for her, but it becomes too much and she ends up leaving Tammy behind to move to the city, abandoning her only real friend, Doug, her boss and provider of weekly adventures in Toronto.

Both leads, Huffman and Phillips, are incredible. You can feel their ups and downs; their happiness and their sorrow. Johnson directs them brilliantly, there’s nothing I would want to change from scene to scene and writer Joanne Sarazen provided an amazing script.

I was raised by a single mother on government assistance and it’s rare to see that represented in comedy. Most of the depictions I’ve seen of poverty are deeply tragic, or verge on melodrama. That couldn’t be further from my own experience. The women I know are completely hilarious. They have to be. Gallows humour is tantamount to survival.

I think that Sarazen nailed this one. The film will likely bring tears to your eyes, but it will also make you laugh. At times, you want to feel bad for laughing… the comedy is so dark that it just doesn’t feel quite right to laugh, but you can’t help it. Keeping up the emotion of the film while delivering perfectly timed comedic lines is a testament to how powerful these two actors are.

While the story is rife with intensely honest heart-breaking elements and subject matter, I immediately took to the levity that the script uses as a lifejacket to keep it from sinking into too dark a territory. I wanted to make this film because I know that there is a power to stepping back and looking at life from a fresh perspective, to not taking oneself too seriously, and to finding the amusing in the absurd.

The film, like life, has its ups and downs. Right now, with everything going on in the world, it was almost comforting. It felt familiar during an unfamiliar time. The movie is a reminder that we need to laugh, no matter what life throws at us. It also reminds us of the power of love, friendship, and family – no matter how dark things look; no matter how far away you drift… you can always go home.

I’m not sure what I expected going into the film, but I came out of it in awe and with chills. 90 minutes later, my eyes are still wet and I’m still not sure if I’m doing this moving justice with this review. I want to sit down and watch it again, to really experience it now that I know the story – paying more attention to the details and the amazing performances. I suspect that this movie is one that I will watch several times.

Check the film out for yourself on digital and on demand on Friday, May 1. 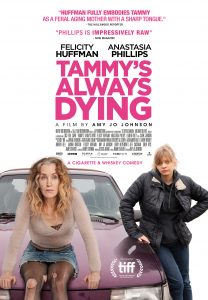 Movie description: Every month, when the welfare money runs out, 35 year-old Catherine has to talk her self-destructive mother off the ledge of the same bridge...literally. This routine has gone on for so long that it’s the only thing Cathy feels she’s good at. And its Tammy’s selfish way of keeping hold of her daughter. When Tammy is diagnosed with terminal cancer and the possibility of life without her becomes very real, so does Cathy’s repressed desire to leave her small town. Does she stay and trust the woman who has always let her down, or does she find the courage to live her own life? And will she ever be able to forgive herself?

There were two reasons I was eager to see Daniel Isn’t Real. The first was that Shudder was involved. I’m quite impressed with their films and enjoy watching anything they release. The second was Patrick Schwarzenegger, […]