Let’s start this review with a question. Is it time for an American 007? My one takeaway from this film was that I could totally see Chris Pine slipping into the role of James Bond. He was definitely looking the part in this one. With that said, we’re here to talk about All the Old Knives. If you’re a Chris Pine fan and you are torn between this and his other new film, The Contractor, let me make things easier… watch this one.

All the Old Knives was actually a really enjoyable film and I was enthralled the entire time that I watched it. Pine plays a CIA agent, Henry Pelham, tasked with investigating the possibility of a mole within the agency. More specifically, evidence has surfaced that a terrorism incident 8 years earlier had ties to someone working within the CIA team Pelham was part of. Pine is tasked by his former boss, Chief of Station Victor Wallinger (Laurence Fishburne) to determine who the traitor is and there are two prime suspects – Bill Compton (Jordan Pryce) and Celia Harrison (Thandiwe Newton).

The story is told via scenes that cut between Pelham interviewing both Compton and Harrison, as well as scenes from 8 years ago during the incident. At times, it does become a little muddy trying to figure out exactly where you are in the timeline, but for the most part it is easy to figure out what you’re watching. The story is filled with twists and turns. Every time you think you know what is happening, another layer is pulled back and a bit more of the story is revealed. I rather enjoyed the mystery and intrigue as I watched the film. This is definitely one of those times when you find your curiosity so piqued that you lean in to the screen, hoping to discern what is truly going on.

Pine and Newton were fantastic in their roles and the scenes of them speaking at the dinner table were fascinating. A while back, there was a TV series called called In Treatment (a series that was revived in 2021), and I couldn’t stand the show, wondering how you could sit and watch two people talk. It turns out that you simply need an interesting topic and finding a mole in the CIA is a very interesting topic. It was quite easy to sit and watch Pine and Newton discuss their business, their past, and everything else about their lives because it was genuinely interesting and the dialogue was really well written.

The screenplay for the film, written by Olen Steinhauer, was based on a book of the same name, also written by Steinhauer. I have not read it, but watching the film, I have to assume that it was very well written. I can see how the story would play out so well on paper, creating a page turner that kept the reader hooked until the very end. There were slight changes I would have made at the end of the film that I think would have made things more interesting and until the last minute I hoped that they would happen. Unfortunately, they did not. However, even without that this was still easily a 4-star film and a true joy to watch.

All the Old Knives will be released in select theaters and globally on Prime Video on April 8. 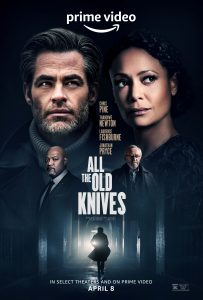 Movie title: All the Old Knives

Movie description: When the CIA discovers one of its agents leaked information that cost more than 100 people their lives, veteran operative Henry Pelham (Chris Pine) is assigned to root out the mole from among his former officemates at the agency’s Vienna station. His investigation takes him from Austria to England to California, where he is reunited with his one-time colleague and ex-lover Celia Harrison (Thandiwe Newton). The pair are forced to blur the lines between profession and passion in this riveting tale of global espionage, moral ambiguity and deadly betrayal. Directed by acclaimed Danish director Janus Metz and written by Olen Steinhauer, the film also stars Laurence Fishburne and Jonathan Pryce.

Before I talk about this film, there’s two points that I want to address. The first is that everywhere I look, this film is tagged as a comedy and, I suppose, that’s a matter of […]

The American Dream and Other Fairy Tales is a documentary from Abigail Disney, the granddaughter of Roy Disney (brother of Walt Disney and co-founder of The Walt Disney Company), that looks at the inequality in […]