Last year, Disney knocked Christmas out of the park with Noelle. I’m not going to say that they beat themselves with this year’s release of Godmothered, but they definitely came close… it’s another home run Christmas film. I love Christmas movies, so all the streaming services creating their own films is perfect as far as I’m concerned and they’ve all done a really good job. I’ve previously covered Happiest Season from Hulu and Holidate from Netflix and Disney is definitely keeping pace with both of them.

Godmothered is a twist on the classic fairy tale.  In an attempt to save her home, fairy godmother in training Eleanor (Jillian Bell) finds a long lost letter written by a little girl in need of a fairy godmother. Jillian ignores the rules and portals to Earth, hoping to help this little girl and restore humanities belief in fairy godmothers. When she arrives, Jillian is completely out of place, which is what brings much of the comedy to the film. Additionally, she was still in training, so her magic isn’t quite there yet… more comedy. When she finally finds the little girl, she’s faces the unexpected. Her little girl is Mackenzie (Isla Fisher), a grown woman with two children of her own. This doesn’t change Eleanor’s goal and she’s determined to give Mackenzie her “happily ever after.”

I think that this movie works for a number of reasons. First of all, it is Christmas themed and everyone loves a good Christmas film. Secondly, the cast is amazing. Jillian Bell and Isla Fisher are both amazing. Fisher, especially, is a criminally underrated actress that lights up every scene she’s in.  They are supported, no matter the scene, by incredible actors. You have fairy godmothers played by Jane Curtain and June Squibb (who also narrates). At work, you have amazing actors like  Utkarsh Ambudkar and Santiago Cabrera and, at home, you have Mary Elizabeth Ellis and two amazing up and coming actresses playing Fisher’s children, Jillian Shea Spaeder and Willa Skye.

The film is filled with heart and soul. It is just mindless happiness in a time when we need more of that. On top of being a film with heart, it’s also got a great message as the classic “happily ever after” is ultimately replaced with “Forget ever after, just live happily.” I like that mentality. I like the idea of finding love in family, in friendship, in passions, and in relationships. In many ways, this film is a romcom without the romance. It has all the components and it is filled with love, but it isn’t about a couple finding that moment that is purely magical and purely fictional. Instead, it was about finding the love in everything around you. That’s a message we need right now. This film is a glass of eggnog or a cup of mulled wine. One of my greatest childhood memories is coming home from cutting down a Christmas tree and sitting down to a steaming hot bowl of pea soup. It was warm and cheery and exactly what you need to fuel the tree decorating. I could see this movie becoming some people’s pea soup. It’s warm and cheery and the fuel you need to get through this year.

If you haven’t already checked it out… check out Godmothered on Disney+. 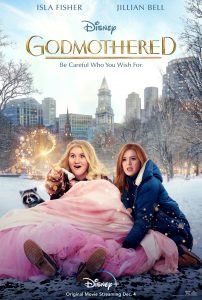 Movie description: Set at Christmas time, “Godmothered” is a comedy about Eleanor, a young, inexperienced fairy godmother-in-training (Jillian Bell), who upon hearing that her chosen profession is facing extinction, decides to show the world that people still need fairy godmothers. Finding a mislaid letter from a 10-year-old girl in distress, Eleanor tracks her down and discovers that the girl, Mackenzie, is now a 40-year-old single mom (Isla Fisher) working at a news station in Boston. Having lost her husband several years earlier, Mackenzie has all but given up on the idea of “happily ever after,” but Eleanor is bound and determined to give Mackenzie a happiness makeover, whether she likes it or not.