From the day Peppermint was announced, I was excited. Alias, Daredevil, 13 Going on 30, Elektra, Juno, Ghosts of Girlfriends Past, and so on – I’ve been a fan of everything Jennifer Garner has  done.  Now she was back in an action role, ready to kick ass and take names. The film came out and was briefly in theatres, but it was never convenient to go, which meant that I was waiting for the VOD release. I pre-ordered it and awaited the midnight notification that it was available. Perhaps I over-hyped the movie, perhaps it was that Jennifer Garner is the only standout in the film, perhaps it was the rushed feel of the film, I’m not entirely sure. What I do know is that Pierre Morel, the film’s director, let me down. He directed District B13 and Taken, two films I thoroughly enjoyed. This time, however, while I enjoyed the movie, I felt it needed additional time. 101 minutes felt short given how many movies exceed 120 minutes these days. It used to be unheard of to have a 2 hour movie and now we’re occasionally seeing movies that are 3+ hours in length. To fully tell this story, which required substantial backstory leading up to the main plot, we could have used an extra 20-30 minutes and the running time would have been acceptable. That said, it was still a great action flick.

The film centres around Jennifer Garner’s Riley North, who is wounded when her husband and daughter are killed while celebrating her daughter’s birthday. They are gunned down due to her husband’s decision to get involved in (and subsequently withdraw from) shady criminal business. Riley realizes that something is going on when she identifies the gunmen but no charges are laid and someone attempts to bribe her. Ultimately, she ends up on the run and disappears for several years. This is where additional time could have been added to the film, we don’t get enough insight into where she was and what she did to become the elite killing machine that she is when she returns to Los Angeles. I would have loved more background.

What comes next is methodical revenge against the gang that killed her family. The action scenes are great and Garner does a great job every time. She definitely sold the film. Unfortunately, we don’t see the pieces come together as she makes move after move, we simply get the action. This felt more like a Steve Austin Direct-to-DVD film or a Jean-Claude Van Damme film of the early 90’s. It’s a great mindless action flick, but a weak blockbuster movie. I expect more from a film starring Jennifer Garner and directed by the man that gave us Taken. I definitely recommend seeing it, but I’d really like to see a director’s cut with more background scenes (assuming any where filmed). 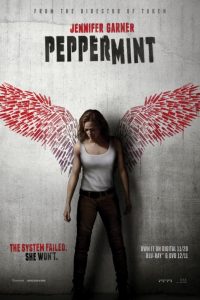 Movie description: Peppermint is an action thriller which tells the story of young mother Riley North (Garner) who awakens from a coma after her husband and daughter are killed in a brutal attack on the family. When the system frustratingly shields the murderers from justice, Riley sets out to transform herself from citizen to urban guerilla. Channeling her frustration into personal motivation, she spends years in hiding honing her mind, body and spirit to become an unstoppable force – eluding the underworld, the LAPD and the FBI- as she methodically delivers her personal brand of justice.

I was really excited when Dating Amber came to my attention. A film set at a secondary school in 1995 was intriguing to me as I spent the second half of the 90s in high school. […]