Right off the bat, let me say that because of this movie, liquid came out of my nose for what I think is the first time in my life, the first time that I can remember anyway. This is not the funniest movie I’ve ever seen, nor was it the funniest scene but the timing of it caused me a fit of laughter at the most inconvenient of moments. That is probably the best summary of this film that I could provide. It isn’t the most dramatic or comedic film around, but it fills both roles well and keeps the viewer entertained. The film is filled with intrigue and keeps you wondering what happens next.

Lost & Found is a series of interconnected stories, many of which were inspired by actual events, and part of the entertainment of the film is trying to connect all the pieces that make up each story. The film was filled with connections and little Easter eggs that were put into motion in earlier segments. I didn’t have high hopes when I went into the film but I was intrigued. I came out with a smile on my face and an eagerness to rewatch the film to see what I missed. This isn’t a 5-star film and you can tell that it wasn’t backed by big studio dollars, but you can also tell that it’s a film with a lot of passion and thought behind it. It’s 92 minutes of pure entertainment that will keep you guessing until the very end.

The main character, Daniel, is played by writer/director Liam O Mochain and serves as the tie that binds all of the individual segments together. One of the things that I really enjoyed was reading the director’s notes after I watched the film and I’m hopeful that the film’s release will include commentary because I think that people will really enjoy hearing Liam’s take on this. Personally, I would love to hear him speak more on the subject because there was clearly a lot of thought put into the production.

Those of you that follow my reviews will know that I hate spoilers and, in this movie, I think a lot of the fun is watching for the interconnected details. So I want to avoid anything at all about the movie, but I will address one detail that I picked up on. You’ll notice that the appearance of the actors changes drastically over the course of the film. That is because the 7 segments were shot over a period of 5 years. Each piece was shot independent of the others and you can notice the passing of time in some of the segments. They are, however, beautifully woven together and the end result is quit magical to watch.

If you have the hour and a half available to you, I would recommend renting this movie. It’s an enjoyable film, but it’s even more enjoyable as a “Where’s Waldo?” type of film, trying to identify all of the interconnected pieces as the scenes move forward. 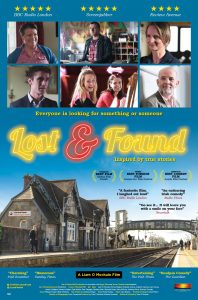 Movie description: 'Lost & Found’ is a film with 7 interconnecting stories set in and around a lost & found office of an Irish train station. All segments are inspired by true stories, share a theme of something lost or found and characters that come in and out of each other’s lives.

Paddleton is a new film from Netflix that premieres on February 22 staring Mark Duplass and Ray Romano. The film takes us through the twists and turns of two middle-aged single friends from the point […]