Before I talk about this film, there’s two points that I want to address. The first is that everywhere I look, this film is tagged as a comedy and, I suppose, that’s a matter of perspective. I, however, saw the dark comedic aspect as secondary to the drama and, as such, I have treated the film that way. There are definitely times when I smiled and even laughed out loud. However, there were also plenty of times when I was uncomfortable, filled with nervous energy, and crying like a baby. The laughter does a good job of keeping your other emotions in check, but in my case, this film was filled with sadness. The second point is that you need to give this movie at least 20 minutes. I almost turned the film off. I felt like I was thrown into the deep end when the movie started and rather than throwing me a life preserver, the film just kept pouring water on me. Eventually, however, it settles down and makes sense and I ended up really enjoying the film. It made me smile, it made me cry, and it left me wanting to hug my family and hold them tight.

The film was written and directed by Larry Clarke, who is also the star of the film, even though bigger names get top billing. He spent three years developing the script at a writing group called Naked Angels and then turned to Indiegogo in an attempt to fund the film, then called DYING:101. The film was shot in 2017 and, as a first time writer/director, I suspect that Clarke is excited to see it finally released.

The move is filled with recognizable faces, which was one of the things I most enjoyed. Seeing people pop up in random places always improves the movie viewing experience. You had Lesley Ann Warren (instantly recognizable from In Plain Sight) along with Tom Arnold and J.K. Simmons (in an absolutely brilliant role).  The always funny David Koechner and Mike O’Malley are both in the film as were Chris Bauer and Sam Trammell, a couple of True Blood alums. Ultimately though, it is Brian Dennehy and Larry Clarke that make this film. Everything else is set dressing and supporting work to the film they bring us. It’s difficult to watch that relationship without a tear in your eye. Everyone around them elevates them, provides the comic relief, and pushes the story forward, but ultimately you are left with a tale of a father and son.

The film starts with a eulogy and works backwards, jumping around to various moments and memories. This was the part of the film that almost lost me. I’ve said it before, but I’ll say it again, when time jumps are happening, you need something to indicate which period the jump takes place in and when that doesn’t happen, when you don’t have that indicator, as is the case with this film, I tend to be easily distracted. There is a point, however, when the film settles down and moves forward in a linear fashion (still memories, but a continuous stream) and that’s when it becomes brilliant. You follow Eddie Mills (Larry Clarke) through ups and downs. Here’s someone who left their small hometown for the big city and he’s returning because his father is dying. That’s a lot of emotion to deal with. Memories of the place where you grew up, relationships – lovers and friends, and everything that has come before the moment you find yourself in. At the same time, you have the drama of family (and there’s always family drama) and the roller coaster that is illness and, ultimately, death. It’s not an easy place to find yourself and for Eddie there are a few more bumps than are expected, but that just brings him closer to us, makes us feel what he is feeling.

At the end of the day, I loved what Larry Clarke did with this film. I loved how visceral it was – how it tried to hit as many feelings as it could and bring them all to the surface. This isn’t a movie I think a lot of people will watch looking for entertainment… it’s definitely not a Marvel flick or another film in the Fast & the Furious franchise, but it tells a story, it makes you think, and it tugs at the heart strings. It’s a movie for those looking for an emotional connection with the material they are watching, for those that want to think and feel instead of watching mindless entertainment. Don’t get me wrong, I LOVE mindless entertainment. I probably would have passed this film over if I was looking for something to watch on iTunes, but that would have been a mistake. It is a touching masterpiece that shows a passion few movies can compete with. Check it out in theatres and VOD on September 13. 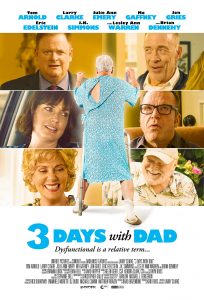 Movie description: The last thing Eddie Mills wants to do is go home to deal with his dying Dad. But the Catholic guilt gnaws at him, and he returns home to his crazy family, an overbearing stepmother, and his bear of a father. Once there, Eddie is confronted with the revelation that he himself is a father, which forces him to deal with the past, he has always avoided.

Tonight being Halloween, a horror movie was in order. I sent my wife out of the room, turned off the lights, and turned on The Howling – Joe Dante’s 1981 classic. My wife had actually […]