Noelle is an instant Christmas classic. Every year, my wife looks forward to watching Home Alone and I rewatch Christmas Vacation. I’m pretty sure that rewatching this movie will be on both our wishlists next year. My wife summed it up best when she said, “I can’t believe how good this is.” The movie has everything – heart, humour, and holiday magic. On top of that it has Anna Kendrick, Bill Hader, and, as my wife describes him, “that guy who yells on the street”, Billy Eichner. Writer/Director Marc Lawrence said,

I’ve always, always, always wanted to write and direct a Christmas movie. Holiday stories are some of my favourite movies. I grew up with them, and I watch them every year with my family. With ‘Noelle,’ I wanted to finally be part of that tradition.

I don’t think that Marc has much to worry about, the film will become a tradition with everyone that sees it. Anna Kendrick is just magical in everything she’s in. I don’t think I’ve met someone who doesn’t love her… I’m certain in Hollywood she’s considered to have the Midas touch because everything she’s in turns to gold. In this film, she is as lovable as she can be, everything about Noelle, the character, is pure heart. I know that I sound like I’m gushing, but this is a film that deserves to be gushed about and Kendrick is someone that needs to be gushed over… everything was perfect. The supporting cast does a great job of filling their roles as well. Everyone is spot on and the movie just comes together in a way that is so much better than I ever expected.

In Noelle, Santa passes away and his duties are inherited by his son, Nick Kringle (Bill Hader). There’s a lot of talk of the prophecy around Santa and the responsibilities passing down from generation to generation.Unfortunately, Nick doesn’t want the responsibility and is stressed out, so his sister, Noelle (Kendrick), suggests he take a vacation. Nick listens to his sister but, instead of a weekend getaway, he disappears permanently. The Santa responsibilities are passed to cousin Gabe Kringle (Billy Eichner), while Noelle takes on the responsibility of leaving the North Pole to find her brother with the help of her childhood nanny Polly (Shirley MacLaine). What we end up with is a sweet and heartwarming holiday tale that will be around for generations to come. The best parts of the movie, by far, are the interactions between Noelle and Jake (Kingsley Ben-Adir) and his son, Alex (Maceo Smedley). When they’re together on screen, it is hard not to smile. Finally, watch for Michael Gross and Ron Funches in fun, minor roles.

At the end of the day, everyone who enjoys Christmas or Christmas movies should see this. Whether you watch it alone curled up under a blanket or with your family sipping hot chocolate, you’re bound to enjoy your evening. I suspect I’ll watch this again before Christmas day. Last year, I was blown away with The Christmas Chronicles and, while very different, this movie may put Disney+ ahead of Netflix in the holiday movie market. Check out this movie on Disney+ this holiday season. 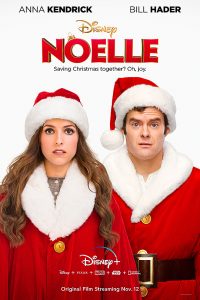 Movie description: In Disney+’s holiday comedy “Noelle,” Kris Kringle’s daughter is full of Christmas spirit and holiday fun, but wishes she could do something “important” like her beloved brother Nick, who will take over for their father this Christmas. When Nick is about to crumble like a gingerbread cookie from all the pressure, Noelle suggests he take a break and get away…but when he doesn’t return, Noelle must find her brother and bring him back in time to save Christmas.

FINALLY! I finally saw Captain Marvel, a movie I’ve been waiting to see since it premiered in theatres. I had tickets for opening night, but a bug kept me from seeing it. A few days later, […]