While this was on Hulu in the United States, it was a rental up here in Canada. My wife and I watched it this weekend and we were quite entertained. The film is not your typical holiday romcom in a couple of ways – it isn’t cheesy, it evokes real emotion via fully developed characters, and it creates tension with a realistic situation. The result is a fun and entertaining film filled with heart. Before we jump into the review, I want to mention that this film was directed and co-written by Clea DuVall, an actress I fondly remember from late 90s films like The Faculty, But I’m a Cheerleader, and Girl, Interrupted. This is DuVall’s second feature film and she did an amazing job at bringing it to life.

Holiday movies become part of your life in a way that other movies don’t. They become traditions, they become something you look forward to. A holiday movie will take you to a very specific time and place. There’s no other cinematic experience like it.

The film centres around Abby (Kristen Stewart) and Harper (Mackenzie Davis), a couple living in Pittsburgh, as they head home to Harper’s parents house for Christmas. On the drive to her parents’ house, Harper informs Abby that she isn’t out to her parents and that they need to pretend they are just roommates; Abby is just coming home with her because she has no where else to go. While this doesn’t sit well with Abby, she agrees. Although it puts a damper on her plans to ask for Harper’s father’s permission to propose.

I love holiday movies, but I’ve never seen my own experience represented in one. Most romantic comedy holiday movies tend to revolve around a heterosexual couple, and if there are LGBTQ characters, they’re in the background. Happiest Season felt like a way to tell a universal story from a different perspective.

The film has an amazing cast with Mary Steenburgen and Victor Garber playing Harper’s parents, Tipper and Ted. Harper’s sisters Sloane and Jane are played by Alison Brie and Mary Holland and Burl Moseley appears as Sloane’s husband, Eric. Rounding out the cast are Jake McDorman and Aubrey Plaza as Connor and Riley, two of Harper’s exes, and the incredible Dan Levy as Abby’s best friend John.

The rest of the film plays out with the usual holiday romcom drama, except that instead of a failing business or a family farm in foreclosure the tension is created from the web of lies that Harper forces Abby to take part in. This adds a level of realism and depth that is unusual in this film, but it doesn’t detract from the typical romcom atmosphere; if anything, it adds to it. There’s something about a movie where, instead of the outlandish scenario that we know is unrealistic, we see ourselves and our own flaws and secrets. Harper’s mother, Tipper, is so focused on showing her family in the best light on social media while her husband, Ted, is determined to win an upcoming election that they don’t see their own children suffering and hiding right in front of them. I think there’s a realness and a rawness to those scenes that everyone can relate with. We can all see ourselves in the fake outer layer presented in the movie.

I gravitate toward universal stories. What I love about watching film is connecting with the characters – even when I’m watching characters who are not like me, which is most of the time, there’s something about their story, their journey, that I connect with. As I filmmaker, I want to tell stories do have that universal quality, told through a more specific lens.

With this being a holiday romcom, you know it has to have a happy ending, but I’ve definitely seen the ending heavily debated on Twitter and I wonder about it myself. Should it have played out the way it did? Should the choices the characters made have had a bigger impact and sent them in different directions? Personally, I’m still not sure if I’m happy with the way the film ended, but it does an extra message about the importance of forgiveness and the power of love. That forgiveness and love was fueled by Dan Levy making one of the most moving speeches I’ve seen in a film recently, so I think I’m happy with it, but I do question myself still. When you watch the film, and you should watch the film, you’ll understand what I mean.

I think that holiday movies are really significant to us. They’re a big part of our childhoods, and a big part of how we experience the most wonderful time of the year, when we take stock of our lives, and are grateful for our family, either the one we’re born into or the one we find. I’m so excited that this is such an accessible holiday romantic comedy.

I think that Holland’s quote is the key to this entire thing. Holiday films define us. Movies like Home Alone and Christmas Vacation have a special place in my heart and I love rewatching them every year. People count down to Hallmark’s Christmas films and Netflix is becoming a power house of watchable Christmas franchises like A Christmas Prince, The Princess Switch, and The Christmas Chronicles. I recently watched Holidate and thought it was a fun holiday movie that gave me all of the things I love about holiday romcoms without the cheese of Hallmark and now Happiest Season has done the same. I appreciate this new trend and I think that Happiest Season will become a part of my Christmas tradition.

Happiest Season is available on Hulu in the United States and On Demand elsewhere, you should definitely check this one out. 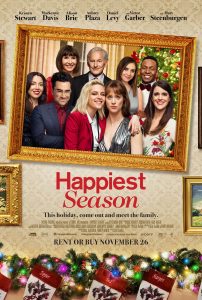 Movie description: Meeting your girlfriend’s family for the first time can be tough. Planning to propose at her family’s annual Christmas dinner — until you realize that they don’t even know she’s gay — is even harder. When Abby (Kristen Stewart) learns that Harper (Mackenzie Davis) has kept their relationship a secret from her family, she begins to question the girlfriend she thought she knew. Happiest Season is a holiday romantic comedy that hilariously captures the range of emotions tied to wanting your family’s acceptance, being true to yourself, and trying not to ruin Christmas.