One of the benefits of the holidays is holiday romcoms. This year, with everything going on in the world, I need that cheesy, wholesome goodness more than usual and I’m sure a lot of you do as well. If you need a pick-me-up, then Holidate from Netflix may be exactly what the mental health professional ordered. It is cute, it is light, it is a lot of fun.

I’ve been obsessed with romantic comedies ever since I was a kid, and I feel like they don’t really make enough of them anymore. When I read this one, I just thought it was so charming, so sweet, and it also covers every holiday throughout the year, which I thought was so fun. I love rom-coms where the whole family gets involved and hilarious disasters ensue.

In Holidate, Emma Roberts (everyone’s favourite Emma) plays Sloane, a woman tired of dealing with her family’s pressure to find a man. Her sister is married, her brother is engaged, and she’s the last single child. Sloane’s aunt Susan (Kristin Chenoweth) suggests that she try out a holidate, a date that you bring to holiday events just to avoid criticism. While initially against the idea, Sloane bumps into Jackson (Luke Bracey) in a typical romcom meet cute and eventually we get a holidate.

HOLIDATE isn’t your typical romantic comedy. There are some hijinks that happen throughout the movie that are pretty hilarious and unexpected. It’s a little raunchy. It’s a little cheeky. It’s got a lot of heart though, and that’s what all kinds of romantic comedies need—a big beating heart behind the back of them.

My favourite part of the film is the comedy… it is funnier than I expect a romcom to be and not quite as cheesy as the factory films we get from Hallmark. It is a cute story that is entertaining and really draws you in. I find that most romantic comedies tend to be incredibly family friendly, but this one has a few more adult jokes that really make you laugh. It’s also the perfect pairing with Roberts and Bracey… not only are they both pleasant to look at, they both give off a very welcoming, casual feeling. With some actors, the romcoms are great but you can tell they are acting, you feel like they are straining to be happy and friendly… with these two it felt natural, they felt like friends you’d want to grab a beer with.

Part of that might just be that they are great actors. Emma Roberts has always wowed in her performances from It’s Kind of a Funny Story to We’re the Millers to Adult World to Little Italy. She just shines when she’s put in front of a camera. Similarly with Bracey, he starred along side Travis Fimmel in the absolutely brilliant Danger Close. He was also in the Point Break remake and while it wasn’t as good as the original film, it was entertaining to watch. It didn’t hurt that they were supported by a stellar cast of well known names from film and television. People like Frances Fisher, Kristin Chenoweth, Dan Lauria, Jake Manley, Cynthy Wu, Alex Moffat, Jessica Capshaw, Manish Dayal, and Andrew Bachelor – every one of these individuals have big credits to their name… it’s actually an impressive cast list.

At the end of the day, I did feel slightly mislead. I was expecting a Christmas comedy and while Christmas is involved, it wasn’t really a Christmas film. It doesn’t matter since it was such a fun movie, but I was surprised to see it span the course of a year… although when you’re trying to convey the idea of a holidate, I guess you need multiple holidays.

Holidate is available now on Netflix. 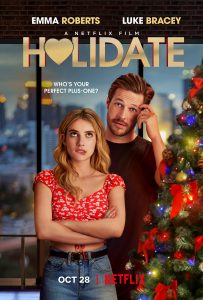 Movie description: Sloane (Emma Roberts) and Jackson (Luke Bracey) hate the holidays. They constantly find themselves single, sitting at the kids table, or stuck with awkward dates. But when these two strangers meet one particularly bad Christmas, they make a pact to be each other’s “holidate” for every festive occasion throughout the next year. With a mutual disdain for the holidays, and assuring themselves that they have no romantic interest in the other, they make the perfect team. However, as a year of absurd celebrations come to an end, Sloane and Jackson find that sharing everything they hate may just prove to be something they unexpectedly love.

Ida Red has a highly recognizable cast. That’s probably the biggest draw to the film because the synopsis doesn’t do it justice. The film is actually pretty good, but you need to dig a little […]