Vince Vaughn is one of my favourite actors, but he hasn’t been in much lately. The last two films I saw him in were Fighting with My Family and Arkansas and neither of them were overly important roles. To see him return to the screen in a leading role with Freaky was perfect. He knocked it out of the park and we got an amazing horror comedy. This film was the perfect amount of gore (my wife only looked away once or twice) and comedy, there were a few scenes that brought tears to my eyes, I was laughing so hard. Writer Michael Kennedy and writer/director Christopher Landon knocked it out of the park.

This film really was a group effort. Primarily on the part of Vince Vaughn as The Butcher and Kathryn Newton as Millie. I love body swap movies and I think I’ve seen all of them, but seeing a horror comedy take on the genre was special. I also found it amusing, although I’m probably the only person on the planet that did, that the stars both have triple consonant names (Vaughn and Kathryn).

This role was definitely written for Vaughn, not many people have the comedic timing to pull off playing a teenager girl while also being imposing enough to portray a serial killer. At the same time Newton is so talented that she is legitimately creepy as a middle aged serial killer. The scene in the kitchen right after the body swap is one of the greatest movie moments of the year and Newton played it perfectly. Of course they are supported by an awesome cast. Celeste O’Connor as Nyla and Misha Osherovich as Josh are both awesome and deliver some great one-liners. Others like Kelly Lamor Wilson and Uriah Shelton also do a great job of supporting our leads.

At the end of the day though, it is Newton and Vaughn that seal the deal and make this a movie that has the potential to become iconic. While I don’t want to spoil the film, I do want to call attention to a few scenes you really need to watch for. As I mentioned above, Newton is amazing in the first scenes following the body swap, but Vaughn is equally awesome, waking up in a serial killers lair as a teenager girl makes for a lot of laughter. Other amazing moments include Newton as The Butcher in the locker room and again with a group of teenage boys near the end of the film. Equally amazing is Vince Vaughn fighting with his friends and trying to get in the backseat of a tiny car. None of these descriptions should spoil the film, but know when you see them that you are in for a wild ride.

I don’t think I have anything bad to say about this movie. It was just a lot of fun and delivered exactly what it advertised. So, why did I give it 4.5 stars? I would have liked more, I had a great running time at 102 minutes, but I feel like I wanted at least 120 minutes, maybe even a few more. This is one of those movies where you’re just along for the ride and you don’t even realize that time is passing because you’re so enamoured with it. Yes, it was perfect the way it was and it told the story, but I could have done with more laughs or more gore and I wouldn’t have complained. It is one of the rare times when a movie was perfect, but could have entertained me a while longer and I would have been just as happy.

You need to see this film which is available for rent on all major VOD platforms. 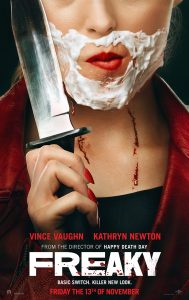 Movie description: Seventeen-year-old Millie Kessler (Kathryn Newton, Blockers, HBO’s Big Little Lies) is just trying to survive the bloodthirsty halls of Blissfield High and the cruelty of the popular crowd. But when she becomes the newest target of The Butcher (Vince Vaughn), her town’s infamous serial killer, her senior year becomes the least of her worries. When The Butcher’s mystical ancient dagger causes him and Millie to wake up in each other’s bodies, Millie learns that she has just 24 hours to get her body back before the switch becomes permanent and she’s trapped in the form of a middle-aged maniac forever. The only problem is she now looks like a towering psychopath who’s the target of a city-wide manhunt while The Butcher looks like her and has brought his appetite for carnage to Homecoming.

I grew up in New York City. From a young age I was struck by the impact of poverty, drugs and violence afflicting those around me. Although the city has changed, I am still troubled […]