That’s what went through my head when I first heard about Arkansas, a movie about drug trafficking by the Dixie Mafia. On top of a stellar list of actors, the film is Duke’s directorial debut. Duke is a brilliant and underrated comedic actor and I was excited to see what he would do with the film. In researching the film, I learned that Duke is from Arkansas, which I expected would give him insight into this movie that other directors wouldn’t have.

This is (my personal version of) the real South. There are no banjos on the soundtrack. The real South is heartbreaking and hilarious, poetic without being sentimental, mannered but brutally honest. To say that I am passionate about this movie does not do it justice- making it was my dream in every way and I am so very grateful that I got to make it with this amazing cast, surrounded by family and friends. Dreams, hard-fought, come true.

The film jumps right in, introducing us to Hemsworth’s Kyle, who gets promoted from a low level drug runner and meets his new partner, Swin (Duke). The two of them end up working for Bright (Malkovich). Who, alongside Her (Fox), runs drugs for Frog (Vaughn). Kyle has the most boring name, so it should come as no surprise that he’s the most boring character and, in fact, the least likeable. I have not read the book that the film is based on, but I’m curious to know if the lack of personality is how Hemsworth played the character or if it was part of the book. There was a lot I liked about this movie, but the film’s main character wasn’t part of it. In addition to Hemsworth lacking on screen, Malkovich was underused. When you have John Malkovich in a movie, you have movie gold and I feel like he was under utilized in the script. That being said, when he does appear, particularly in his final scenes, he is absolutely brilliant. Increasing his lines or screen time would have easily bumped this up to a 4-star movie.

I have to give a lot of credit to Duke. Even with Hemsworth’s lacklustre performance, the film was well structured, interesting, and enjoyable to watch. As an actor, Duke carried the film. I would like to see a film with him, Vaughn, and Malkovich because the three of them were golden on screen… an absolute pleasure to watch. They were also responsible, at various times, for much of the comedy in the film. While the movie is billed as a dark comedy, I was expecting more laughs when I saw Duke and Vaughn attached to it. It definitely had its moments and Duke is brilliant as the comic relief, but I wanted more.

The movie takes place during two time periods – present day and Frog’s rise to power from pawnbroker to drug kingpin. The flashback scenes involving Frog’s progression were a joy to watch. I really enjoyed that part of the movie. As I already mentioned, anything with Malkovich or Duke was also amazing to watch. I was not a fan of Hemsworth or Fox’s characters… I wasn’t sure they added a lot to the story (even though Kyle is the focal point for much of the present day story).  It’s hard to recommend a film when the protagonist doesn’t fit. That said I do recommend it, if for no other reason than to see what Duke can do behind the camera and because there were magical performances.

So, why did this film get 3-stars if the protagonist is the main problem? The film suffers from what I consider to be a death blow for movies… bad sound editing. This was a movie where I had to sit on the remote, turning it way up to hear dialogue and then way down when background noise and music became overwhelming. This will continue to be my biggest complaint about many modern movies, there are so many bad sound editors and audio engineers in the industry. They ruin a lot of good movies by overpowering the dialogue with music and sound effects. I understand that they all want to create that theatre rumbling sound, but most of them just fail to create anything good. I find this to be a huge problem with indie films today, a lot of the lower end post production audio companies aren’t that good. Over the past few days, I’ve watched four films – Bad Boys for Life, Spaceship Earth, Bloodshot, and Arkansas. Two of those films had more action than Arkansas, yet it was the only movie where I had to sit on the remote and constantly adjust the volume. At the end of the day, I find more and more that the sound editing is the weak point for films. In fact, thinking about it as I write this review, I can’t even say that Hemsworth was the weak point that I thought he was, it may have been bad sound quality that undermined his acting.

Would I watch the film again? No. Am I glad I watched it? Yes. I think that Duke, Malkovich, and Vaughn make this film worth watching. It is, however, better left to a streaming service than a paid viewing. It is available on digital and on demand on May 5. 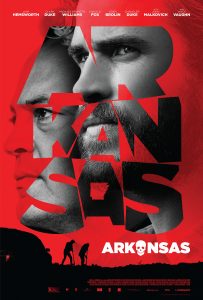 Movie description: In Clark Duke’s directorial debut, Kyle (Liam Hemsworth) and Swin (Clark Duke) live by the orders of an Arkansas-based drug kingpin named Frog (Vince Vaughn), whom they’ve never met. Posing as junior park rangers by day, they operate as low-level drug couriers by night under the watchful eye of Frog’s proxies (John Malkovich and Vivica A. Fox). Swin then settles into his day job by taking up a relationship with Johnna (Eden Brolin) against orders to blend in while Kyle continues to question his night job by trying to figure out who Frog really is. Their world is then upended after one too many inept decisions, and Kyle, Swin, and Johnna find themselves directly in Frog’s crosshairs, who mistakenly sees them as a threat to his empire. Based on John Brandon’s best-selling book of the same name, Arkansas weaves together three decades of Deep South drug trafficking to explore the cycle of violence that turns young men into criminals, and old men into legends.

All Hail The Popcorn King

All Hail the Popcorn King was a complete surprise to me. I thought I was sitting down to watch a documentary about the author of Bubba Ho-Tep. I was, but I was also watching a documentary […]

There was a lot of talk about Venom when it came out, mostly because of the back and forth with A Star is Born and the negative reviews fans were leaving on the opposite films. Everyone […]