I wasn’t sure what to expect going into this movie, the trailer had looked great but it was a comedy that involved WWE Studios, which is not exactly a genre they’re known for. In the end, it was awesome! The movie follows Saraya Knight (WWE’s Paige) from childhood to winning her first WWE Divas Championship. We weren’t sure how much comedy to expect, but film was actually quite funny and which shouldn’t have been a surprise with cast members like Nick Frost, Vince Vaughn, and Stephen Merchant (who also directed the film). The star of the film though was Florence Pugh as Paige, while she doesn’t have an extensive filmography, she was the superstar of the film.

My wife, who has never been a fan of wrestling, first pointed the film out to me. I hadn’t paid attention to wrestling since the 90s, when it was still the WWF, but I was excited to see if the film was any good. Dwayne Johnson has put out a lot of really good films and I typically enjoy the action films from WWE Studios. Given the subject matter, I wasn’t sure my wife would appreciate the flick, but I think she liked it even more than I did… and I loved it. You’ll likely be hard-pressed to find someone that doesn’t enjoy this movie, so it’s a great one to watch when you have a bunch of people around with varied tastes.

One disappointing aspect of biopics is that they often exaggerate the situation to make it more impressive on film. Thankfully, there was some footage at the end to to confirm some of the scenes were real. One thing that my wife was curious about was the final showdown on RAW, when Paige won the championship, so we looked up the footage on YouTube. We were disappointed that it wasn’t identical to the scene in the film. They definitely made Paige’s dialogue and experience more impressive in the movie than it was in the actual match. Although, the film leaves out a lot of the experience that she’d gained at that point and it’d be difficult for someone to have a speech that empowering without it being scripted and prepared in advance – the dialogue was definitely more Hollywood than WWE.

It’s difficult to talk about a movie based on a true story without spoiling some of the additive material that not everyone will know. With that said, one of my favourite scenes was Paige’s brother, Zak, training a blind boy to be a wrestler. I loved that the summary text at the end of the film indicated that the boy did indeed go on to wrestle. Another great scene involves The Rock backstage at the event where Saraya and Zak show up to tryout for the WWE. The monologue that Dwayne Johnson delivers may be one of the best things I’ve seen on screen this year and had my wife and I both in stitches. One final point I’ll make is that Lena Headey appears in this film and she once again shows the range that she has as an actress. I saw her name in the credits and I knew it was her, but I had a hard time believing it at times, she did a great job of becoming the character.

This film is one of the best movies I’ve seen in 2019 and I would recommend seeing it as soon as possible. My wife and I waited to rent it and that’s a decision that I regret, I wish we had watched it much sooner. It was fun, entertaining, and you’ll find yourself disappointed when it ends because you want to see more of the story. 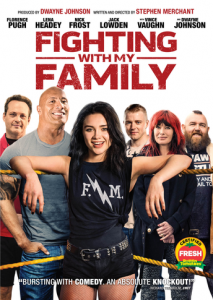 Movie title: Fighting with My Family

Movie description: Born into a tight-knit wrestling family, Paige and her brother Zak are ecstatic when they get the once-in-a-lifetime opportunity to try out for WWE. But when only Paige earns a spot in the competitive training program, she must leave her family and face this new, cut-throat world alone. Based on the incredible true story, this heartwarming comedy follows Paige as she proves that what makes her different is the very thing that can make her a star.

Chris Pine has been in a lot of excellent films over the years. Seeing him in The Contractor reminded me that not every film will be excellent. That’s not to say that The Contractor isn’t a good […]