Nicolas Cage. As far as I’m concerned, that could be the end of this review. Cage is one of those actors that most movie viewers tend to love or hate, and they’ll decide right away if they’re watching a film or not based on his presence. My wife, for example, is thankfully in the pro-Cage category like me. She understands why I have a massive poster for The Sorcerer’s Apprentice and why we have a drawer that contains a 35mm film strip of the theatrical trailer for Windtalkers. Hopefully, this establishes why you might find this review slightly biased toward Nic Cage.

A Score to Settle is a movie that fits into the recent run of revenge action thrillers that are making the rounds. You may have read my recent review of Avengement, which is thematically quite similar. Cage is released from prison due to a fatal condition, which we learn is a type of insomnia. Upon his release, he is met by his son and briefly visits the home where he lived with his son before his incarceration, which is now occupied by another family. While there he digs up cash buried in the backyard; a payment for taking the fall for a crime he didn’t commit. Cash that he now intends to use to spoil his son, hopefully making up for 19 years of being behind bars.

While living it up with his son, Cage begins to seek out the men he ran with in his younger days. The ones who told him that he’d do 5 or 6 years, not the 19 years he unexpectedly ended up spending in a cell. The film is relatively dark; filled with betrayal, lies, and death. Even so, the film was not without humour. Much of it is dark humour and there is one scene in particular between Cage and a pimp where a frightened hotel employee sits on a couch that drew quite a bit of laughter. The hotel employee was put into such an awkward situation that you couldn’t help but laugh at his confusion and discomfort.

Even though A Score to Settle is an action thriller with a side of dark comedy, it’s not without a few touching moments as well. At the core of the story is a dying man looking to right wrongs, while dealing with the emotions surrounding multiple personal interactions, some old and some new. I felt tired watching Cage struggle through the insomnia to keep going. I felt his pain around certain realizations. At the end of the day, one of the reasons I’m such a big Nic Cage fan is that he always delivers an amazing performance. He’s a hell of an actor and you know he’ll put on a good show regardless of the material he is given. In this case, he gets a decent script that tries to keep you guessing until the end with several twists and turns that you may or may not see coming.

I would say the film tries to pull one over on the viewer at least three times. One of the three was very obvious early on, or at least I thought it was, but the other two were a bit more of a surprise. I think that regardless of when you catch on to the twists, you’ll appreciate them and the level of depth they add to the entire cast of characters.

At the end of the day, you have Cage, you have action, you have a few laughs, and you have an emotionally fulfilling film. You can’t ask for much more, so check it out when it hits theatres and on demand on August 2. 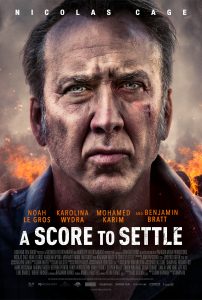 Movie title: A Score to Settle

Movie description: Diagnosed with a fatal condition, Frankie Carver (Nicolas Cage) is released from prison after serving 19 years of hard time. With only a short time left to live, Frankie must desperately try to make amends with the son he left behind while he plots a bloody course of revenge - tracking down his old gang to make them pay one by one.