Growing up in the Latino community, I noticed that many of my friends and family members constantly had to do this calculation about how they were being perceived–trying to make sure that they weren’t being perceived the wrong way. Many members of the Latino community–along with the Black community–live in a culture of fear surrounding the police. Carey and I wanted to do something that touched on that fear, specifically, and what it does to you as you’re moving through your day-to-day life.

What does it mean to live in a country where a sizable segment of the population is more afraid of what might happen if they call 911 for help during an emergency than they are of the emergency itself?

I think that the film’s writer, KD Dávila, describes the film better than I could. Emergency is a film that combines that “wild teen night out” coming of age story with a serious look at how systemic racism influences the decisions that a large portion of the population make. I think that gives the film a rather unique perspective that I haven’t seen before, a perspective that I’ve never personally experienced. As such, rightly or wrongly, I treated the film as both entertainment and an educational experience. Trying to put myself in the shoes of the film’s main characters and understand the experience they were having and choices that they were making was an enlightening thought experiment.

The film revolves around college students Sean (RJ Cyler) and Kunle (Donald Elise Watkins). As they are about to graduate college, they aim for one epic night of partying. In the process of preparing for the night, they stop by their house and find a passed out woman on the floor (Maddie Nichols). They check in with their roommate, Carlos (Sebastian Chachon), who was home but had no idea this woman was unconscious in their living room. Kunle’s initial reaction is to call 911, but Sean freaks out at how the police will react to three BIPOC men with an unconscious white woman on their living room floor. What ensues is a night of fear, panic, drama, and a bit of hilarity.

The story in the film is told from a few different angles. While you have the story of Sean and Kunle (who have very different world views), you also have Maddie (Sabrina Carpenter) and friends searching for her sister who has wandered off from a party. It should not come as a surprise that these stories collide in a very expected way. Watching so much panic for very different reasons is simultaneously entertaining, frightening, and enlightening. So many poor decisions are made in the film, but then you have to step back and realize that you are an outside entity with perfect clarity and the benefit of a calm and rational thought process. I wouldn’t normally call a coming-of-age story deep, but I think that’s the word that best describes the film. You really do think when you watch this. It is unavoidable to feel the pain, the fear, and the panic that each person on screen feels and to be empathetic to the choices they make. I credit the writer, director, and cast for giving us incredible characters that touch and impact us as we make our way through the story they are weaving.

We also have to talk about the cast of this film. Cyler and Watkins are fantastic as Sean and Kunle as is Carpenter as the completely freaked out college student who has lost her little sister. Really, the entire cast does a great job, but I want to focus on Cyler and Watkins because they play opposite each other so well. The characters are the ultimate odd couple – Sean clearly had a harder life growing up which is revealed by his decisions and developing portions of the story, while Kunle lived a relatively privileged and, seemingly, sheltered life. They are the difference between surviving and prospering at the beginning of the film. By the end of the film, however, you get a clearer understanding of how society paints them both with the same brush. You see how intentions and choices are meaningless when everyone around you judges a book by its cover. Watching Cyler and Watkins act their way through the film is both endearing and heartbreaking. The film speaks to the power of love and friendship, but also the dangers of assumptions and bias.

Finally, I want to focus a bit deeper on Watkins and the character of Kunle. Kunle is, without a doubt, the central focus of the film. While Sean is just as important to the story, the two characters are vastly different. Sean has seen more of the world, he has had his world view jaded by his experiences and the system has already failed him. Kunle, on the other hand, has yet to experience the hardships that life holds for someone who looks like he does. Watching him transform as the movie progresses is a wild and devastating experience to see first hand. The final moments of Kunle on screen are a sight to behold. I truly believe that is because of Watkins and the brilliant performance he delivers. As I said, the entire cast did an incredible job, but Watkins was the one that brought tears to my eyes, the one that broke my heart, the one that left me uncomfortable and unsure of what to say or do.

I watched this film a week ago and I normally publish my reviews before a film’s release date, but I struggled with this one. I struggled with what I saw and what I wanted to write. I’m not sure if writer, KD Dávila, and director, Carey Williams, are aware of what an impactful film they’ve created. I’m sure that they must be, but they created something that I struggled to process in a way that I’ve never struggled with a film before. I’ve seen a lot of indie films that I’ve considered ground-breaking and that have changed how I think about life and the world, but this film and those final scenes are something that I just can’t shake. I really hope that people see this for what it is. It is so much more than another coming-of-age story or another “wild teen party” story. It is something that you can’t unsee, something that is disgustingly eye opening for someone who will never experience that. Somehow, they managed to package that in a movie that is entertaining and easy to watch. It doesn’t preach, it doesn’t lecture… it just is and that is more than enough.

Emergency is available on Prime Video. 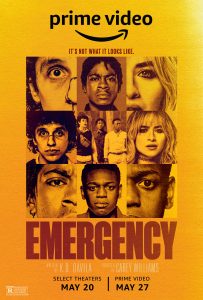 Movie description: Kunle (Donald Elise Watkins) and his best friend, Sean (RJ Cyler), are both seniors in college about to embark on an epic night of Spring Break parties. Sean has the whole night planned out, including every party they will hit on their “legendary tour.” Kunle is down, yet mostly concerned with finishing up his mold experiment in his lab, as his acceptance to Princeton is hinging on the results. They return to their apartment to pre-game, yet find that their roommate, Carlos (Sebastian Chacon), left the door open. As they enter with trepidation, Sean and Kunle discover a drunk, semiconscious White female they don’t know on the floor and an oblivious Carlos, who didn’t hear hercome in over the videogame blaring in his ears. Kunle wants to call the cops but Sean vehemently opposes the idea concerned how it will look when the cops show up (two Black men, one Latino man and a passed out White woman). Together, Carlos, Sean and Kunle load the girl (who they nickname Goldilocks, but whose real name is Emma (Maddie Nichols) into Sean’s van, with the intention of taking her somewhere safe rather than calling the police. Meanwhile, Emma’s sister, Maddy (Sabrina Carpenter), has realized that Emma left the party they were at, and begins to search for her in a drunk panic using Emma’s phone’s location. What ensues is a chaotic, hilarious, and tension-filled chase all over town as our trio grapples with their differences while attempting to bring Emma to safety.

I’m feel like I’m slipping a little. In 2017, I watched A Christmas Prince the day it was released. After all, it had iZombie‘s Rose McIver and I was a huge fan of that show and […]

One of my favourite things about starting this website has been the discovery of films that I never would have considered watching and I’ve definitely discovered a few gems. LETO was one of those gems. […]