When I first received the trailer for Avengement, I was torn. The trailer didn’t catch my interest but, as I do with all films that I’m presented, I decided to give it a chance and watch it. I’m really glad that I did as the film is quite good. It suffers from a similar issue to many of the movies I’ve looked at lately, the trailer doesn’t do the film justice. If this was a trailer I had seen on YouTube or the AppleTV, I would never have considered watching the film. I’m glad that I didn’t randomly stumble upon this film and hopefully this review drives a few more viewers toward the film because it’s worth spending 90-minutes to watch it.

Before I get into my review, there’s two things I want to mention. The first is that avengement is a word. We all know avenge, but avengement is not a word you typically hear. A couple of people that I’ve recommended the film to this week have asked if it was a word and verified my claim with Google. Knowing the meaning of the word, it fits the film perfectly, but it’s definitely one of those words that just doens’t sound quite right when you first hear it. The other is that during the opening scene, two police cars and a paddy wagon pull up at the hospital. They drive around a white circle painted on the ground with arrows around it, this caught my attention. I thought to myself, “It’s like a mini roundabout.” I did a quick search after the film and it turns out that mini-roundabouts are a thing. Not necessarily interesting to anyone else, but it caught my attention.

The film features Scott Adkins as Cain Burgess, a fighter without much going for him, looking to invest in a gym with money he hopes to borrow from his brother, Lincoln (Craig Fairbrass). Lincoln gives his brother a task to complete before he’ll loan him money, which ends up landing Cain in prison, where he must fight to stay alive. Interestingly, while you get most of this from the trailer, it is not where the film starts. The film introduces us to Cain as a prisoner on furlough who learns that his mother has passed away before he could say goodbye. He proceeds to break away from his guards and that’s when the story really starts.

The backstory of Cain ending up in prison and surviving while there is told via flashbacks as Cain tells the story to others. I really enjoyed the aspect of the film, it was a great way to tell the story and one of the reasons the film stood out in ways the trailer never could. Adkins does an amazing job at delivering the character of Cain and gives a very believable and enjoyable performance. While there are plenty of roles with only a few lines, everyone does a great job of clearly portraying their characters via body language and actions. Speaking of action, this film is loaded with it. It reminds me of the movies of the mid-90s, that classic mix of violence and machismo. It’s the kind of movie that I could see myself sitting down and watching with my dad.

The film is definitely not for the faint of heart. From dismemberment to shotgun amputations, this film has its share of gore. There are plenty of prison fights in the flashbacks and the final 10 minute fight scene was amazingly choreographed and had me on the edge of my seat for the entire time. The film, while filled with dark action, has a few lines that made me laugh out loud. The humour is also very dark and disturbing, but if this is the type of action movie you think you’ll enjoy, then you’ll probably laugh a couple of times as well. Another great comedic aspect of the film is Thomas Turgoose as Tune, he adds just the right amount of comedy to cut the violence and tension at just the right times.

At the end of the day, I say give the film a watch. It may not be a Hollywood blockbuster, but it’s a solid action movie with a really interesting story. I could see myself adding this DVD to my collection, simply to have it on hand to lend to friends. 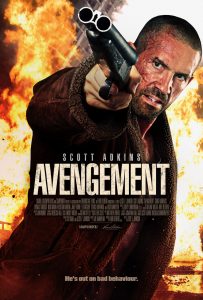 Movie description: While released on furlough from prison, a lowly criminal evades his guards and returns to his old haunts to take revenge on the people that made him a cold-hearted killer. It’s an epic, bloody battle to search for the soul he lost years ago on the streets of an unforgiving city.