Let me start this review off with a bias alert. I LOVE Kevin Smith. His movies are some of my favourite films. You will not get an unbiased, critical review of this film here… instead you will get a Kevin Smith fan writing about Kevin Smith’s love letter to his fans. I’m not attempting to hide that and, as such, you may not agree with my review, but either way… here we go.

Jay & Silent Bob Reboot is Kevin Smith perfection. It is a movie filled with cameos, throwbacks, laughs, and love. I counted the days until I could purchase this film and tried everything I could to get my hands on an advanced review copy. As soon as it was available, my wife and I sat down to watch it. I suspect that for many people, her thoughts will be more appropriate since she isn’t a Kevin Smith fan like I am. She said she enjoyed it and that it was what she expected. Personally, it was so much more than I could have hoped for.

It’s hard to talk about this film without spoiling anything… every scene is a new laugh, a new tear, or a new moment of magic. So, I’ll be discussing this film in very generic terms, but know that you can stop reading now because my recommendation is that you see it.

We should start with the cameos. If you haven’t already seen the full list, I think you’ll be surprised and excited… everyone is in this movie. The cast of Clerks, the cast of Comic Book Men, past actors from Kevin Smith movies like Ben Affleck, Matt Damon, Joey Lauren Adams, Shannon Elizabeth, Rosario Dawson, Justin Long, Jason Lee, and more. You had Val Kilmer, Chris Jericho, Chris Hemsworth, Melissa Benoist, James Van Der Beek, and more. Let’s not forget both Kevin and Jay’s daughters and Kevin’s wife, Jennifer Schwalbach. Every cameo is more magical than the last and brings on more laughter and more awesomeness. Let’s not forget that there’s a very fitting tribute to Stan Lee, both in the movie and after.

So what is the movie actually about? Jay and Silent Bob need to stop a film from being made, a reboot of the movie they were trying to stop in Jay & Silent Bob Strike Back. This involves a crazy road trip, a convention, and a lot of fun. It’s also got a lot of heart, as we get a touching family story along the way. The film was enough to make me tear up more than few times, even though I laughed along the way. Again, huge Kevin Smith fan here, but I’m getting chills just writing about this movie.

Here’s the deal, watch the movie. There’s a lot of naysayers out there talking about how disappointed they were with this film. There are critics who have trashed it (and some that have said worse and should probably be fired) and there are members of Kevin Smith fan groups saying they don’t like the film. Those people are wrong. Taste may be subjective, but you can’t call yourself a Kevin Smith fan and not like this film. You can’t know his body of work and look at this with anything other than awe. A few of the movies I’ve reviewed have come along with opportunities to sit down with the director, that was never something I was interested in, but with this movie, I wish I had 5 minutes to pick Kevin’s brain. I have no idea how he pulled off something this amazing, but he did and everyone should take the time to sit down and watch it. 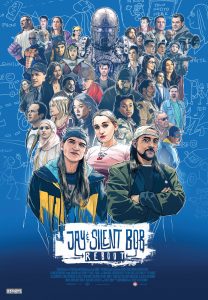 Movie description: The stoner icons who first hit the screen 25 years ago in CLERKS are back! When Jay and Silent Bob discover that Hollywood is rebooting an old movie based on them, the clueless duo embark on another cross-country mission to stop it all over again!