Werewolves Within was an interesting film that was quite entertaining. I was expecting a horror movie and it just didn’t show up. I was expecting something like Eight Legged Freaks, WolfCop, or Shaun of the Dead. Instead it felt more like Knives Out with a werewolf. In the end, I was pleasantly surprised and found myself really enjoying the film, even though it went in a completely different direction than I was expecting.

The film centres around a small town (a very small town) with an interesting cast of characters. We meet the residents of the town alongside Finn Wheeler (Sam Richardson), the town’s new ranger, as he is introduced by postal worker, Cecily Moore (Milana Vayntrub). The town is divided over the installation of a pipeline. So, take a cast of quirky characters and add a point of contention, you’ve got everything you need to create a good film. When a dog is killed and power is knocked out, the film becomes a classic whodunnit.

What is really interesting is the basis for the film and how that lends itself to the big screen. For those that are unaware, the film is based on the Ubisoft game of the same name. That game, which has similarities with the popular game, Among Us, is based on the game Werewolf (you may be familiar with the board game Ultimate Werewolf), which is ultimately based on the game Mafia. Some of you may have heard of these titles, some of you may have played them. If you have experienced any of them, then you can guess at where this film is going. If you haven’t, I’ll share just a little bit more. The idea, in any of the variants of these games, is to find the Mafiosi, the werewolves, or the traitors (depending on the game variant) without information. While the players in these roles know that they are, no one else does. It ultimately becomes the blame game, where innocents are punished simply because they are suspected. In other words, the court of public opinion rules and innocent until proven guilty is abandoned. The movie allows you to watch that concept play out and it is highly entertaining.

This movie is a tribute to those of us who are resolute that good conquers evil, and that “being good” is the best weapon we’ve got, against guns, knives, even claws… Sometimes, you just gotta be a good neighbor, no matter how wicked people are.

One of my favourite parts of the film is definitely the inclusion of Mr. Rogers. The film starts with a Mr. Rogers quote and contains references during the film. I thought this was a really neat way to emphasize the importance of community and the value of being neighbourly. I also thought the film did a great job of using the threat of a werewolf to demonstrate why you should be a good person. While it was a fun movie to watch, the writer, Mishna Wolff, did a great job of incorporating a message into the fun. I think that’s why I enjoyed the film more than Knives Out, it felt like it had more of a well-developed and thought-out story and it felt like it served a purpose.

Add in an entertaining cast, especially with Richardson and Vayntrub, and this film is well worth checking out.

Werewolves Within was released in theatres on June 25 and will be available on Digital Rental and VOD on July 2. 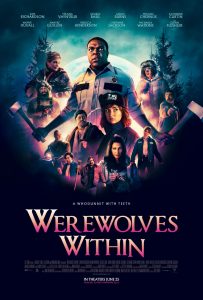 Movie description: After a proposed pipeline creates divisions within the small town of Beaverfield, and a snowstorm traps its residents together inside the local inn, newly arrived forest ranger FINN (Sam Richardson) and postal worker CECILY (Milana Vayntrub) must try to keep the peace and uncover the truth behind a mysterious creature that has begun terrorizing the community.

Before I talk about this film, there’s two points that I want to address. The first is that everywhere I look, this film is tagged as a comedy and, I suppose, that’s a matter of […]